Abigail Lincoln(Negative Numbuh 5)
(voiced by Cree Summer) – An intelligent and laid back African-American girl. She wears a red cap, blue dress with white stripes on the side, white shoes, and braided black hair. Despite having the highest number, Abby is Sector V's second-in-command, rarely overreacting in their missions, instead opting to calm her friends, and usually assumes leadership whenever Number 1 is absent, including saying "Kids Next Door, Battle Stations!", Number 1's usual line. She talks in third person much of the time, and loves sweets (especially ice cream). In "Operation: I.N.T.E.R.V.I.E.W.S.", it is shown that she takes over sector V after Numbuh 1's departure and becomes the supreme leader of KND. She often had episodes focused on her which involved Heinrich Von Marzipan, a candy hunting villain and rival. Abby has a teenage older sister named Cree (formerly known as Numbuh 11 and also voiced by Cree Summer) who betrayed the KND and is a recurring teenage villain. Her last name is a reference to the fact that President Abraham Lincoln is on the United States five-dollar bill. 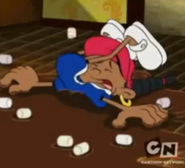 Add a photo to this gallery
Retrieved from "https://xianb.fandom.com/wiki/Abigail_Lincoln(Numbuh_5)?oldid=351605"
Community content is available under CC-BY-SA unless otherwise noted.