The second Animal Path of the Six Paths of Pain belonged to a young woman who, in the anime, was a Amegakure kunoichi named Ajisai (アジサイ, Ajisai).

In the anime, during the start of Amegakure's civil war, Ajisai was one of many to become left in awe hearing about "Pain"'s power from "Lady Angel", and their commitment to their goals of bringing peace and prosperity to the world for all villages by teaching them of hardship and pain.[1]

While alive, in the anime, Ajisai was a very solemn and stoic person. She rarely talked more than she needed to and was very committed to her mission. A strong supporter and believer of Pain and Konan's views of the world and their plans to change it, Ajisai looked to them with unwavering trust and faith. To which end, Ajisai had noticeable disdain to the Five Great Shinobi Countries, blaming them for the hardships of smaller nations because of the wars that they dragged others into. Despite this, Ajisai is open-minded, learning that the structure of the Five Great Shinobi Countries does not define each individual that comes from them, as seen from Ajisai developing respect for Tenten.

Having been chosen by Konan for a mission to search for jinchūriki, Ajisai seemed to be a skilled kunoichi. She showed noticeable skill in taijutsu, as she was able to defend herself during an all-out brawl with other genin without getting hit. She also showed quick reflexes, able to calmly dodge a kunai thrown at her. Ajisai could use the Summoning Technique to summon a strong defensive gate that could block and withstand taijutsu attacks or a giant panda to aid her in battle. She wasn't capable of jumping high, a trait which reflected on her body being used as the second Animal Path, requiring other Paths to send her body flying towards or away from locations.

Similar to Tenten, Ajisai specialised in fūinjutsu showing considerable proficiency in storage-style scroll sealing. She also showed rather large reserves a of chakra, able to store large masses of the landscape that impede her path.[1] In battle, she carried multiple small sealing tags, each storing a variety of weapons and tools to such as ropes, confetti, and shuriken. She was able to quickly summon her tools and surprise her enemies with a barrage of attacks or concealing her escape. 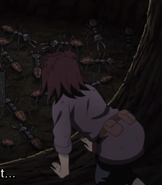