Akiko Yoshida is the younger sister of Toshi Yoshida.

She was silent in "American Dream Factory". Grey DeLisle provided her voice in "Weiner of Our Discontent", but was replaced by Grace Park in "Best Little Horror House in Langley Falls". 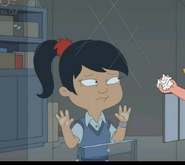 Add a photo to this gallery
Retrieved from "https://xianb.fandom.com/wiki/Akiko_Yoshida?oldid=379786"
Community content is available under CC-BY-SA unless otherwise noted.