eing the daughter of one the Seven Stars, Almiria is polite and reserved in her mannerisms. She is very cheerful, especially around McGillis Fareed who she affectionately calls "Macky."

At times she feels insecure of her engagement to McGillis as she's looked down upon for being far younger than him.

Almiria is first seen when Gaelio and McGillis go to the Bauduin estate and she personally greets them, exuberant at McGillis returning and boasts she's learning to become a proper wife. She makes McGillis tea, but refuses to do so for her brother for teasing her.

Later she attends a ball and overhears the guests demeaning her by calling her a child. McGillis comforts her by carrying her so they can look each other in the eyes.

In the season finale she's being consoled by McGillis due to the death of her brother (not knowing McGillis was the one who killed him). Devastated that he's gone, she begs McGillis not to go anywhere to which he promises her she won't. With Gaelio dead she is now the sole heir to the Bauduin family.

McGillis Fareed - Engaged to McGillis at a young age, Almiria is enthusiastic of the arrangement and works to make sure she'll be a proper wife to him despite the arrangement being solely political. McGillis is very polite and considerate with her, consoling her with her insecurities and compliments her on her tea brewing.

Gaelio Bauduin - While polite and respectful towards her brother, Almiria dislikes it when Gaelio treats her like a child. The two often fire barbed comments at one another like siblings would. Despite that, they love each other dearly and Almiria is left heartbroken when she hears of Gaelio's death. 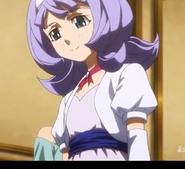 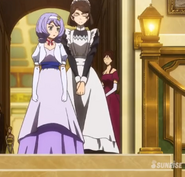