Kurt Wagner(Nightcrawler)
In X-Men: Evolution, Amanda Sefton appears as Nightcrawler's love interest, but she does not have most of the background of her comic counterpart. Her mother's name remains Margali, but the Seftons appear to be a normal family. She is portrayed as an American teenager of African/Romany decent who accepts Kurt completely despite his mutation. She was voiced by Moneca Stori. In her first episode, "Shadow Dance", Amanda asks Kurt to be her date for a school dance and tells him that she did have a crush on him for months but was too shy to tell him, and that her feelings remained even after she once accidentally saw him turning off his image inducer. They start dating seriously, and after a time ("The Toad, the Witch and the Wardrobe") Amanda attempts to introduce Kurt - as his true self - to her parents. The intention is ruined by Toad, who steals Kurt's image inducer, demolishing the Sefton home and blowing Kurt's cover before Amanda can properly prepare her parents. Even though Amanda's parents are understandably upset, Amanda shrugs off any discomforts which they might bring into her relationship with Kurt, and continues to date him. 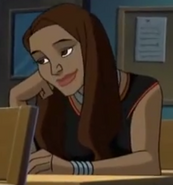