He was the Dark Lord of the Sith, who served under the Galactic Empire.

Skywalker was miraculously conceived by Shmi Skywalker, on the planet Tatooine. He was born into a life of slavery until the age of 9. At that time, he was discovered by Jedi Master Qui-Gon Jinn, who came to believe that Skywalker was the Chosen One of Jedi lore, destined to destroy the Sith and bring balance to The Force. After Jinn's death at the hands of a Sith on Naboo, Skywalker was trained by Obi-Wan Kenobi. The two grew a brother-like bond, after serving together during the Clone Wars. Within weeks of the war, he was promoted to Jedi Knight by Master Yoda.

Unfortunately, Skywalker was turned to the Dark Side, after being persuaded by the Supreme Chancellor Emperor Palpatine, a Sith Lord, in order to save his loved ones from death. Skywalker was dubbed Darth Vader, the Dark Lord of the Sith. After slaughtering the Jedi in the Temple and the Separatists on Mustafar, he was confronted by his wife and former master. Feeling betrayed by everyone he knew, he mortally choked his wife and then engaged Kenobi in combat. He lost the fight after he lost both his legs and left arm. Seconds later, he caught on fire and suffered severe burns to the point that he had to wear a life-support suit for the rest of his life.

After his recovery, he took his place at Palpatine's side.

Fourteen years after the fall of the Jedi Order and the rise of the Empire, Darth Vader's master, the Emperor, sensed a new threat that could rise against him; the children of the force. Under the command of his Master, Darth Vader tasked the Empire's Inquisitor to hunt down this new enemy, as well as to try and convert the group's Jedi master and padawan to the dark side of the Force.

Following the Rescue of Kanan Jarrus at Mustafar, there were now whispers among the citizens, saying the Empire was weak and vulnerable. To make sure the Empire was in more control of the system and with any hopes of ending the Rebellion, the Emperor sent Darth Vader to Lothal, who would be taking over the hunt for the Rebels. 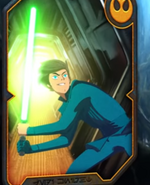 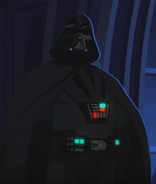 Add a photo to this gallery
Retrieved from "https://xianb.fandom.com/wiki/Anakin_Skywalker(Darth_Vader)?oldid=338355"
Community content is available under CC-BY-SA unless otherwise noted.