Anakin Skywalker later known as Vader and known as Darth Vader by the Jedi  is a Star Wars minifigure based on the character of the same name. He was first released in 1999, and has had a total of twenty variations made to date.

Race for the Holocrons

Luke Skywalker, Leia, C-3PO and R2-D2 are at Utapau trying to find a ship to travel to Tatooine, but a Boga attacks them after it gets a rock kicked at it by Luke. It chases them down a hole, including itself as Luke jumps down to save them. As for Han Solo and Chewbacca, Vader attacks the Millennium Falcon in his personal TIE fighter, thinking they destroyed the Death Star. Han and Chewie manage to destroy Vader's fighter, but he manages to sneak in and interrogate Han Solo and his Wookiee about Luke's whereabouts, but not before insulting the Falcon. 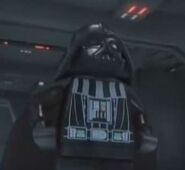