Android 17 (人造人間１７号, Jinzōningen Jū Nana-Gō), Lapis(ラピス, Rapisu) when he was Human,is a character in the Dragon Ball manga, and the anime series Dragon Ball Z and Dragon Ball GT. He is the twin brother of Android 18 and Dr. Gero's seventeenth android creation, designed to serve Gero's vendetta against Goku who overthrew the Red Ribbon Army as a child. Despite his interests not initially deviating from this expectation, Android 17 takes it upon himself to kill Dr. Gero, who is uncooperative with Android 18's curiosity in activating Android 16.

Android 17 was originally a human named Lapis,[1] and the youngest out of him and his twin sister Lazuli.[3] The twins were notorious delinquents, who Dr. Gero would meet by chance while looking for fresh material for his experiments. He then kidnapped them and restructured them into Android 17 and Android 18.[4] He is the first artificial human, out of him and his twin sister, designed by Dr. Gero to be created by fitting a human being with both bio-mechanical and cybernetic enhancements. The bio-mechanical enhancements are organic substances patterned after human cells, which makes it possible for Cell to merge with the androids at a cellular level.[5] Since they are human-based, they can become stronger if they train. Though they do not need to eat, they do need to hydrate. Also, their cells deteriorate slowly, so they age slowly too.

Android 17 and his twin sister Android 18 are awakened by Android 20, when he is pressed into a desperate situation by the Z Fighters, who have surpassed his expectations because of the intense training they endured after Gero collected their statistic data. Severely disloyal to Gero in contrast to the android models which precede himself and his sister, Android 17 turns rogue on the scientist, impaling and decapitating him. Android 17 and 18 then proceed to activate Android 16, and decide to challenge Goku not because they have been commanded to do so, but merely as a form of entertainment.

When Vegeta (as a Super Saiyan) intercepts the trio, 17 and 18 implore 16 to step in and fight, interested to see him in action (their main purpose for activating him in the first place). However, Android 16 refuses to fight him, thus prompting Android 18 to volunteer. When Future Trunks, Krillin, Piccolo and Tien Shinhan arrive as Vegeta's reinforcement when Android 18 dominates Vegeta in the fight, Android 17 takes the opportunity to ask if Android 16 will join the fight, though as he initially assumed Android 16 once again opts not to. When 18 breaks Vegeta's arm during the battle, Future Trunks breaks Android 17's non-interference truce because he could not bear to see Vegeta injured. Android 17 intervenes and fights against Future Trunks, dealing one hard hit to his head, almost knocking him out. Android 17 also chokes Tien when the latter tries to punch him, and he does not let him go until Piccolo tries to save Tien. He then effortlessly defeats Piccolo, dealing a single blow that nearly tears through the latter. At the conclusion of the encounter, everyone is rendered incapacitated besides Krillin, who is spared so that Android 17 may see the others healed by Senzu Beans for another battle. This is one of many examples that set Android 17 and Android 18 apart from their future timeline counterparts, especially considering they are much stronger in the mainstream timeline than in Future Trunks' future.

Later, Android 17, Android 18 and Android 16 arrive at Kame House, asking where Goku is. Piccolo (after fusing with Kami), challenges Android 17, hoping that he can defeat at least one of them and prevent Imperfect Cell from absorbing just one of his targets and achieving his perfect form, which would spell doom. Android 17 accepted Piccolo's challenge and contends to fighting Piccolo one-on-one, rather than fight with Android 18; this vastly increasing Piccolo's chance to win. Piccolo appears to have the upper hand in the battle; until Android 17 confesses that up until now he has not been taking their struggle seriously. Once both choose to go at full power, they find that they are an even match. Equal in both power and strength; Android 17 having an advantage because of his unlimited energy and speed, and Piccolo matching that with his regeneration and variety of energy attacks (Scatter Shot,Light Grenade, as well as other attacks). Android 17 almost gets injured by Piccolo's Hellzone Grenade attack, but he protects himself with an Android Barrier.

The fight is an apparent draw until Cell's arrival interrupts the match (ironically, Cell is able to detect Android 17 through the nearby presence of Piccolo, who had engaged Android 17 in an effort to impede Cell's progression to perfection). Piccolo assists Android 17 in avoiding Cell and Android 17 thanks him in return. While Piccolo tries to aid in the battle against Cell, he is tossed aside after Cell admits to have become stronger. Android 17 ends up horrified when he witnesses Cell brutally disposing of the Namekian. While Android 17 is struggling to defend himself, Android 16 steps in to fight Imperfect Cell and is able to hold Imperfect Cell off for some time, repeatedly surprising him with intense attacks such as his Hell's Flash. However, this sudden turning of tables creates an overconfidence in Android 17, who lingers to the scene of the battle, where the wounded but thriving Cell surprises and ultimately absorbs him, triggering his transformation into Semi-Perfect Cell.

All evidence of Android 17 is destroyed along with Cell's initial body, when Cell detonates himself as a last ditch effort to emerge victorious in the Cell Games(as his design allows him to regenerate so long as a single cell of him remains intact). However, 17's life is restored after the Z Fighters use the Dragon Ballsto revive those who died as a result of Cell's campaign. A second wish made toShenron by Krillin removes the self-destruct device within Android 17 and Android 18's bodies (Krillin originally intends to use the wish to turn Android 17 and his sister into Humans, but this proves beyond Shenron's power). Krillin did this because he thought 17 and 18 were meant to be a couple, until Android 18 angrily corrected him and revealed that 17 was actually her twin brother.

After the conflict with Cell, Android 17 becomes a park ranger in the wildlife preserve area of a gigantic royal nature park, where he is well paid. He is an outstanding guard who does not hold back against poachers. It is an ideal job for #17, as he loves to be on his own and is not big on cooperating with others; since he is so good at his job, he takes in a high salary. Android 17 also marries a zoologist; they have one child and two adopted children, and live happily in an isolated house inside the nature park. He went and met #18 and Krillin one time, but did not talk about what he had been up to, maybe because he considers such a wholesome lifestyle embarrassing.[1]

Due to the bio-mechanical and cybernetic enhancements Dr. Gero gave him, including an unlimited supply of energy and allowing him to have endless stamina, he was powerful enough to be an even match for Piccolo fused with Kami. However he was no match for Cell after having absorbed hundreds of thousands of people to increase his power.

He is also stronger than his sister, Android 18. 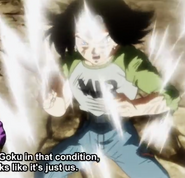