Angel is a character from the 2003 TV series, a friend of the Turtles,Casey Jones and April O'Neil.

Angel is a youth from Casey's neighborhood, who, together with her ​​older brother Ryan lives with her ​​grandmother. It is not known why Angel and Ryan have no parents, it is probable that they died and her grandmother now has legal custody of the two. Although Casey promised her grandmother that he would look out for her, he could often not spare the time for it and Angel has been getting into all sorts of trouble.

Angel quickly became bored with the middle-class society, which drove her to "cooler" people on the street. She eventually became captivated by the Purple Dragons around the neighborhood and followed them in hopes of joining their ranks. During one of her "tests", which was a robbery, Casey and the Ninja Turtles showed up to prevent them from getting away. Casey was stunned to find Angel among the thieves and tried his best to discourage her from joining them, but Angel ignored him and ran off. Although she escaped, Casey was determined to make sure she didn't join the Dragons officially. He infiltrated their hideout just as Angel was about to fight two Purple Dragon members. Casey stepped into the ring to take Angel out of there, but Hun stepped in and captured him. Hun held a cage match to see, who was allowed to finish their hated enemy. Guilt-ridden, Angel tried to free Casey from his prison but was unsuccessful. Casey told her to contact Raphael in the abandoned warehouse at the corner of Eastman and Laird. When she got there, she was surprised to find four humanoid turtles standing in front of her. They all infiltrated the Purple Dragon's hideout and, after causing a ruckus, managed to escape with Casey in tow. Afterwards, she renounced her juvenile delinquent ways and became a loyal friend and reliable ally to the Turtles. Fallen Angel

She later attended the Turtles holiday party. She and Raphael use some mistletoe tricks to try to help Casey get a kiss from April O'Neil. The Christmas Aliens

Some time after, Angel burst into the lair begging the turtles they help her find her brother, Ryan, who had been gone for three days in an abandoned mansion, looking for gold coins. The turtles and Angel encountered a legion of undead warriors, where an old man living in the mansion saved them. The four turtles went back down to conquer the creature that controlled the undead warriors, with Angel being forced to stay behind. The turtles eventually returned with Ryan. The Darkness Within

Later, when the Foot Mystics attacked the turtles through a dream, in it, the Turtles were chased by the Earth Protection Force, and it was suggested they contact Angel and ask for her help, though this led to the deaths of April and Casey. Bad Day

Shortly after Karai became the The Shredder, Leonardo contacted Angel and instructed her to fake a pizza delivery (due to members of the Foot keeping heavy surveillance on the location) to the Second Time Around shop, where April O'Neil worked, to ask where the turtles were. April wrote back and Angel gave the note to Leonardo. Prodigal Son

As a street Girl, Angel naturally knows the skills produced in Brooklyn, where she grew up. Through her experiences from the road she also has certain skills in hand-to-combat, with which she can use to help herself out of tricky situations, and she also has a certain talent in lock picking. 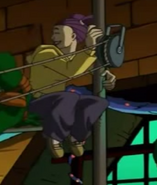 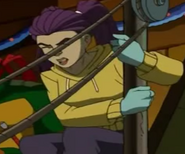 Add a photo to this gallery
Retrieved from "https://xianb.fandom.com/wiki/Angel(Dimension_Third_Earth)?oldid=235936"
Community content is available under CC-BY-SA unless otherwise noted.