She is a Traitor to the Human Race.

Graduating 4th, a rank below Bertholdt Fubar, Annie chose to enlist in the Military Police. When the Colossal Titan breached Wall Rose, the same way it did with Wall Maria, Annie was assigned to rear guard with Mikasa and a few of the others to help fend off the Titans as the people are evacuated to the safety of Wall Sina. She was involved in helping Jean Kirschtein and the other retake the supply unit to restock the gas canisters for their gear. While watching the Rogue Titan fight off the other titans, Annie overhears Jean and Reiner arguing, and so she thinks that the Rogue Titan may be their ally. She later learns about Eren's titan shifting ability.

During hand-to-hand combat training, Annie easily bests Eren and Reiner with a kicking technique her father taught her. Later on during dinner, she watched as he used the same technique to subdue Jean when he tried to pick a fight again. The next day, Annie and Eren were watching him as he practice hand-to-hand combat. She noticed that Jean's only taking it seriously just to pick a fight again and doesn't see anything positive from it. Annie points out something wrong in how Eren handled the kicking technique and offers to teach him the proper techniques.

Soon the two titans captured for research are killed and the Military Police check the Three Dimensional Maneuver Gears from the trainees. During that time, Armin, Annie and Conny Springer discuss which military branch they want to join. When Annie reveals that she will go to the Military Police, Conny considers joining them too and asks for her opinion. Annie responds by telling him that it's his decision to make, not hers. When she learns that Armin plans to join the Scouting Legion, she asks him what he would do if he was ordered to die. He tells her if the reasons are good, then he'll do so. Annie thinks he's weak physically, but yet he's very strong at heart. Later we learn that she offered Marcock Bodt's 3DMG for inspection as her own, and that prompted Armin to become suspicious of her. Ultimately during the Scouting Legion draft, Annie leaves to join the military police.

Annie awakens in her room in the Stohess District of Wall Shina. Her hair is the same as the Female Titan's when not tied up in a bun. Annie is teased by Hitch and Marlo, but a member tells them to leave her alone believing that she hasn't recovered from battle and is the only one who has real combat experience. Soon Armin approaches her and asks for help in hiding Eren until they can convince the king to better protect the walls. Annie reluctantly agrees by putting on her father's ring and escorts them to a place where they can hide. When Eren and Armin try to get her to go down an underground passageway with them, she refuses and suspects something is awry. Mikasa, having enough of Annie's games, takes off her hood and draws out her 3DMG. She refers to her as the Female Titan. Armin's suspicion is confirmed when she smiles in the same way as the Female Titan, and by her refusal to enter the passage, where she cannot transform

After firing a signal, disguised recon corps comes out of their hiding places and try to restrain Annie. Seeming captured, she is still able with a flick of her thumb to open a small blade hidden in her father's ring and prick herself, thereby allowing her to transform into her titan form and kill those restraining her. Now, resuming her attempts to capture Eren, Armin and Mikasa realizes how desperate she is and try to get him to fight her. Overcoming his initial shock at the identity of the female titan, he transforms into his titan form and takes Annie on.

As Eren tries to hold Annie off from escaping, Mikasa realizes that she may be the only one who can stop her. Knowing that she may try to climb the wall to get out of Wall Shina, she trails Annie. Annie decides to fight and defeat Eren again. After that, she continues to try and escape. However, by that time, Mikasa had already caught up to her climbing the wall. Not hesitating in the slightest, she cuts off all of Annie's titan fingers, leaving her to fall. Mikasa then tells her to fall down, and pushes her off via the head. Eren in his titan form holds down the body as both the military police and the members of the Scouting Legion, cut into the flesh and try to extract Annie.

However, Annie uses her Harden Ability to create a crystal barrier around her before she's exposed from her Titan body to possibly either prevent her court-martial and execution or to avoid interrogation by the government altogether. One of the Scouting Legion members desperately tries to break the crystal to extract her only for his blades to break. Hanji stops him and tells both the Military Police and the rest of the Scouting Legion to take her underground and detain her. Meanwhile, Jean who went into town posing as Eren learns the truth about Annie being the Female Titan.Ultimately, Annie has been so desperate to kidnap Eren and reasons for that at the moment remain unknown. 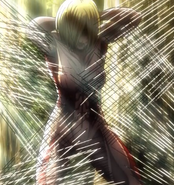 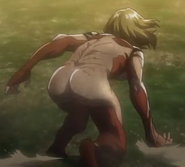 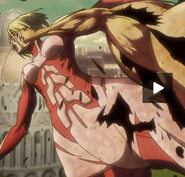 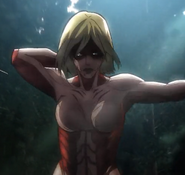