April Harriet O'Neil was a television reporter for Channel 6News. She was employed by Burne Thompson, though due to her headstrong nature and passion for her work, she expressed frequent disagreement with the assignments he gave her. She also butted heads on a regular basis with Vernon Fenwick, the director/camera operator whose enormous ego compelled him to beat April on her stories whenever possible.

April was best friends with Irma Langinstein, the receptionist at Channel 6. April could usually be found wearing a distinctive yellow jumpsuit with white boots. She lived in an apartment in New York City, though during the course of the series, she was forced to relocate several times due to a variety of indirectly Turtle-related mishaps.

When a battle between the Purple Dragons and what appear to be the Teenage Mutant Ninja Turtles is captured on film, the Turtles are quick to refute their master Splinter's accusations of carelessness. Breaking into the Purple Dragons' headquarters to get to the bottom of these mysterious doppelgangers, our Turtles discover that their "imposters" are, in fact, versions of them from another dimension.

The goofy other dimensional "1987 Turtles" prove to be a hassle for the more serious-minded "2003 Turtles", but they are soon able to discern that they were teleported into their world in a dimensional portal accident that has also brought their arch-enemies, the Shredder and Krang, and their battle fortress, theTechnodrome, along with them. The eight Turtles head below the ground to track down the Technodrome, but their presence together only clues the Shredder in to the fact that there may be a version of himself on this world that he can ally with to take the Turtles down.

The Technodrome escapes, and the Turtles resolve to create a portal device of their own so they can travel to the "1987 universe" and obtain the gear the 1987 Turtles usually use to take the Technodrome down. While the Turtles are occupied with this task, Oroku Saki uses the Technodrome's technology to locate his dimensional counterpart, the Utrom known as Ch'rell, still in frozen exile on an ice asteroid after his final defeat by the 2003 Turtles.

Ch'rell is teleported to the Technodrome, but upon recovering from the powerful penetration, immediately overthrows his bumbling other-self and seizes control of the Technodrome.

Using Dimension X technology and Utrom science to create a new robotic exoskeleton for himself, Ch'rell dispatches his right-hand man Hun who has been mutated into a monstrous mutant turtle himself after being doused with mutagen from the 1987 universe in the earlier battle, to track the Turtles down. With the aid of Bebop and Rocksteady, Hun finds and attacks the Turtles' lair, but the eight reptiles complete a dimensional portal stick (conceived by the 1987 Donatello) and escape to the 1987 universe. Unfortunately, Splinter is captured by Hun and brought before Ch'rell to serve as bait in a trap.

The 2003 Turtles meet the 1987 universe versions of April O'Neil and Splinter, and then return to the 2003 universe with the 1987 Turtles vehicles: the Party Wagon and Turtle Blimp. However, they discover that in their absence, Ch'rell has fused the sciences of the Utroms and Dimension X and rebuilt the Technodrome as a truly terrifying war machine, filled with legions of improved robotic Foot Soldiers and mutated Purple Dragons. Entering the fortress to recover Splinter, the Turtles are defeated, and Ch'rell then reveals his master plan: While using Saki's equipment to survey the Multiverse in his plan to conquer it, he has discovered that there are not just the Turtles of the 1987 world and the 2003 world, but hundreds of them. Knowing that the turtles of those dimensions would stand in his way to conquer those worlds, Ch'rell decided to destroy them all by eliminating the original "Prime" universe.  Ch'rell scans the eight Turtles to locate the base similarities between them that will pinpoint the location of "Turtle Prime," and the brothers apparently do not survive the process. Once Ch'rell has teleported the Technodrome away across the dimensions to Turtle Prime, however, the Turtle reappear, having been saved by Karai, who has realized that Ch'rell's mad ambition would also cause their own destruction.

With their world being erased around them as Ch'rell's plan goes into motion, the Turtles break into Purple Dragon headquarters again to appropriate some of the tech the criminals stole, in order to upgrade their dimensional portal stick and follow Ch'rell to Turtle Prime. With the aid of a repentant Hun, they accomplish their task and are whisked away to the grim, gritty and monochrome world from whence all Turtle realities sprang. They are attacked by the native "Mirage Turtles," but eventually manage to convince their ferocious progenitors that they need their help to save all of creation.

The twelve Turtles, with the aid of Splinter, Karai, and even Saki and Krang, engage Ch'rell in battle, but he grows to massive height using molecular amplification technology from Dimension X. When Ch'rell is accidentally clipped by the energy beam from the Technodrome, however, his armor is damaged, and the Turtles all try to force him into the beam ... before it is abruptly cut off when Rocksteady trips over the power cable and unplugs it. Ch'rell takes this opportunity to grab the four Mirage Turtles and begins crushing them. At the last minute, the 1987 Turtles throw explosive throwing stars at him, causing him to trip and drop the Mirage Turtles. Ch'rell then resumes his attack - until Bebop plugs the beam power cable back in and thus inadvertently obliterates Ch'rell.

With their foe defeated, the Turtles watch as their respective realities restore themselves. The 1987 cast take the Technodrome and return to their homeworld, while the 2003 Turtles use the portal stick to return to theirs. The Mirage Turtles decide to go get some pizza to eat ... as somewhere else, across time and space, Peter Laird and Kevin Eastman put the finishing touches on the first issue of Eastman and Laird's Teenage Mutant Ninja Turtles, expressing the hope that the book will sell. 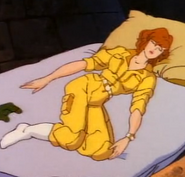 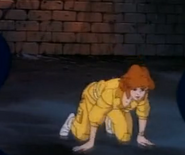