Strange Family
April Strange was the younger sister of Stephen Strange. When she was a teenager she began to suffer from devastating headaches caused by a developing tumor in her brain. Her brother took her to four doctors, all of them saying the same thing, that no matter what they did she was not likely to survive.

Months later her brother Stephen graduated from medical school, becoming her new doctor and attempting to remove the brain tumor. Despite her brothers efforts, April died during the procedure. 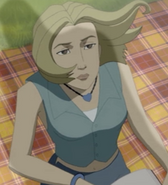