Write the first paragraph of your page here.

Arale can move at Mach 1 while walking, got from Earth to Saturn in a few seconds, and ran around the world many times in a brief amount of time. She can easily lift 100 tons, and has enough power to destroy the Earth with a single punch[23] or move the planet from Mars to Venus (which is a distance of at least 141,578,000 miles) with a single stomp. She also survived being crushed between Mars and Earth with little visible damage. Arale is capable of destroying the moon just by throwing a rock at it. She also managed to knock Caramel Man 001 so hard that he flew into the sun in a few seconds and cracked it upon impact. In the crossover episodes of the Dr. Slump remake with Dragon Ball, Arale fights against Goku when he is out of control in his Great Ape form, and she grabs him by the tail and throws him off into an open area. However it is shown in Dr. Slump that she is unable to defeat Caramel Man 007, even with the help of Obotchaman, she is also shown to be unable to defeat the Teapot Genie - who was so powerful it took the likes of an angered Tsukutsun Tsun to defeat.

Arale easily overpowers General Blue in Dragon Ball and defeats Mercenary Tao as well in Dragon Ball: Mystical Adventure. During the time the King Piccolo Saga was made, Toriyama stated that if Goku and Arale fought, Arale would probably be stronger than Goku.[24] 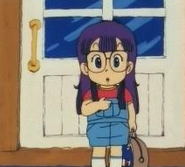