Ashi and all of the members of the Daughters of Aku shared the same appearance. All of them have big eyes and wear a black latex suit. When in undercover, they usually wear a mask to conceal their own identities.

The only difference between Ashi and all members of Daughters of Aku is that all of them have different hairstyles. Ashi's hair is combed up to a single point.

Ashi seems to possess a curiosity about the world, especially when she was younger. She's clever to go after the archer first in her final test, making the task much easier.

Ashi and her six sisters were birthed from The High Priestess who is the leader of an all female cult of Aku and raised as assassins by them, to do what no other fighter could do, destroy Jack. They were put through the most brutal of training, designed to sculpt them into the ultimate warriors, such as facing a hulking, muscle bound opponent when they were mere children. When their training was complete, they donned the masks and head coverings, and set out to fulfill their mission. 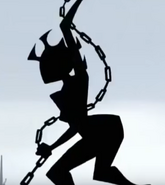 Add a photo to this gallery
Retrieved from "https://xianb.fandom.com/wiki/Ashi?oldid=389145"
Community content is available under CC-BY-SA unless otherwise noted.