Xianb Wiki
Register
Don't have an account?
Sign In
Advertisement
in: My Techniques, Waterbender, Metalbender,
and 7 more

The strongest and most powerful ability that the Avatar can invoke is the Avatar State. It was created when Wan permanently bonded with Raava by touching the energy coming through the spirit portal during the Harmonic Convergence in 9,829 BG. It allows the Avatar to channel vast cosmic energies and the knowledge of previous Avatars, granting them superhuman strength and allowing for the ability to perform especially powerful and extraordinary feats of bending. The Avatar may unconsciously enter the State in response to perception of mortal danger, utilizing the State as a defense mechanism, or emotional distress. While in the State, the Avatar has access to bending techniques that may have not yet been learned in their current lifetime, but has no conscious control over the resulting actions, which can cause great collateral damage. An Avatar with full mastery of the Avatar State has conscious control over the State and can enter and exit it at will. It was by entering the Avatar State reflexively that Aang was able to freeze himself and Appa inside an iceberg for a hundred years by using a combination of airbending and waterbending. He did not physically age at all during the century, as he was in suspended animation, but it took a great physical toll on his body after being in the Avatar State for such an extended period of time.[21]

It is possible for an Avatar to control the Avatar State, as Aang, Roku, Kyoshi, Kuruk, Yangchen, and the unnamed Fire Nation Avatar have demonstrated in numerous flashbacks, but this requires great spiritual discipline and concentration. Guru Pathik attempted to teach Aang to control the Avatar State by helping him clear his chakras, but Aang could not let go of Katara in exchange for cosmic power.[22] Fire Sage Kaja informed Roku to clear his mind, but Roku found emptying his mind of thoughts to be quite challenging and was initially unable to do so.[1] More often, the Avatar State is activated by danger or emotional turmoil. Aang inadvertently entered the Avatar State when he discovered that his friend and teacher, Monk Gyatso, was killed bycomet-enhanced Fire Nation soldiers.[16] Aang also entered the Avatar State when General Fong placed Katara in danger by sinking her into the ground with earthbending.[20] When in complete control of the Avatar State, an Avatar's eyes glow momentarily, rather than continuously.

It is possible for an Avatar to channel a specific previous incarnation while in the Avatar State. When this happens, the Avatar briefly takes on the appearance and voice of that previous incarnation. Aang did this on multiple occasions, channeling Roku twice,[11][18] and Kyoshi once.[19] The appearance of these incarnations seems to vary as Roku always appeared as an old man while all the other Avatar incarnations appeared youthful and in their prime. It is unlikely the age of the Avatar's death is the deciding factor in their appearance since Avatar Kyoshi lived for 230 years and would not have kept a young appearance at that time. It is possible that those in the Spirit World manifest visually as they see themselves and not as they currently are: Aang saw himself garbed in Air Nomad attire and with a shaved head within the Spirit World, even when he was wearing a Fire Nation outfit in the physical world and had hair.

Entering the Avatar State allows the Avatar to break free from the effects of bloodbending, as demonstrated by Aang when he dispelled Yakone's hold on him.

There seems to be two distinct ways to how the Avatar State works:

When the State activates without the Avatar calling on it, the Avatar's eyes, and tattoos in the case of an Air Nomad Avatar, glow white constantly, and Raava's spirit allows for active channelling of the energy, skills, and knowledge of past Avatars through the body of the current Avatar, heavily augmenting the current incarnation's bending abilities.

The State works this way almost exclusively when it is triggered as an instinctive, unconscious reaction, a 'defense mechanism' for when an Avatar's physical capabilities would be insufficient to confront the current threat, or in situations of extreme emotion, specifically rage and sorrow. So it may be more accurate to describe the State being used this way as 'reflexively' rather than 'continuously'. When the State is triggered this way, the current Avatar has little to no control over the performed actions and may retain little to no memory of what happened, though this is not always the case.

Aang appeared to use the State this way against Fire Lord Ozai after the scar on his back was forced against a rock unlocking his final chakra. Just as Guru Pathik had said,[22] this event led to Aang being able to control the State himself, and unlike previous times where he entered the State, he was not physically exhausted.

When the State is used intentionally, the Avatar's eyes, and tattoos in the case of an Air Nomad Avatar, glow momentarily, and during that time the current Avatar stores the knowledge and energy needed so that it can be released once exiting the State, taking only the power needed for a specific task. This reduces the danger of being killed in the Avatar State and enables a more willful, controlled use of the Avatar State's power. This can only be done by an Avatar who has mastered the State as it is a conscious use rather than an instinctual response. Mastery of this technique is part of what distinguishes an Avatar as "fully realized". However, Avatar Korra was seen several times entering the Avatar State continuously, despite having mastered it.

The Avatar State also allows an Avatar to join with certain spirits. This was demonstrated when Aang entered the Avatar State in order to aid the frantic Ocean Spirit. Both Aang in his Avatar State and the Ocean Spirit combined their abilities to defend the Northern Water Tribe after all waterbenders were rendered defenseless.

Aang was mortally wounded by a lightning strike from Azula while in the Avatar State. As a result, the Avatar Spirit was jeopardized, resulting in the Avatar Spirit's fall from the plane of existence. Katara was able to use the spirit watershe received from Pakku to revive Aang and consequently the Avatar Spirit.[24]The strain of the revival caused Aang to slip into a coma for several weeks, and during that time, he managed to retain his connection to his past lives by meeting with the four most recent ones.[1] However, it took longer for his ability to use the Avatar State to be restored.

Another downside to the Avatar State is the considerable mental strain it can cause to less experienced Avatars. Prior to his tutelage under Guru Pathik, Aang would often leave the Avatar State feeling horrified at what he had done under its influence. Furthermore, use of the State, at least in extraordinary circumstances, can place such a large physical strain on an Avatar's body such that their life span can be affected, as seen when Aang's one hundred-year time in the iceberg contributed greatly to his eventual death at sixty-six years of age biologically and 166 years chronologically.[12]

Known incidents of use

After the Hundred Year War 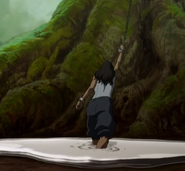 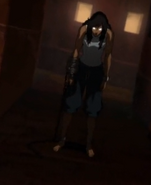 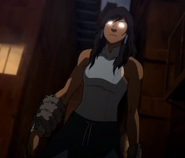 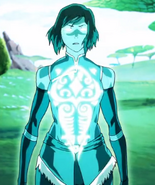 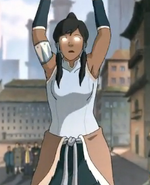 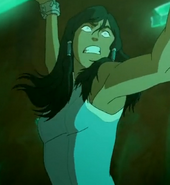