Deputy Director Avery Bullock is Stan 's boss at the CIA. He is voiced by Patrick Stewart.

Bullock has worked at the CIA for over 25 years. Despite his age, he is in top physical form, as evidenced by his close fight with Stan in "Bullocks To Stan".

"Roger Codger" reveals that he is a Protestant along with agent Duper, the only non-Episcopalians.

He is also a cocaine addict in "I Can't Stan You", and he has a fetish for overweight Asian women, bagging Coco in "One Little Word". In "Cock of the Sleepwalk", he claims to be part of a group of "responsible" cocaine and opium users when he offers Stan some cocaine. However, before Stan can completely excuse himself from Bullock's office, Bullock comes crashing through the celling in a cocaine high.

Despite all this he often ends up acting like a teacher to the other CIA agents, having them write essays, scolding them when they use poison darts on one another in "Bush Comes to Dinner" as well as sending them to the 'quiet area' without 'Milk Time' when they argue with him in the same episode, as well as having a show and tell day in "Office Spaceman".

CIA internal affairs begins to fear that Deputy Director Bullock begins to show signs of dementia in "The Full Cognitive Redaction of Avery Bullock by the Coward Stan Smith" and decides to erase his memory.

Although he is the boss of the CIA, Bullock often acts like a school teacher, scolding his agents when they make mistakes or acted like children. He is a very proud man and refused to negotiate with terrorists even when his wife was a hostage. Avery is not the most faithful of husbands and although he loved his wife he has slept with other women more than once.

Despite his age, Bullock was able to get into quite a few romantic relationships, even sleeping with Stan's daughter, Hayley in "Bullocks To Stan". He claimed to like fat Asian women. Bullock was also very loving towards his adopted son but also revealed that the baby could be a liability. In "Faking Bad", he nearly hooks up with a 17 year-old who presents him with a fake ID and is forced to shoot her father multiple times to defend himself.

Bullock had a wife named Miriam Bullock. She was stated to be missing in Fallujah, Iraq and chained to a radiator, until her only on-screen appearance in "One Little Word" in which she was rescued. She was brainwashed and turned into a terrorist, but recovers upon her realization she was a mother through the adoption of Avery Jr..

In "Ricky Spanish", Roger's persona of Ricky Spanish was revealed to have stabbed Miriam to death with a sword at her birthday party.

Avery Bullock enjoyed fishing and apparently liked ping pong judging by his excitement when he revealed the CIA were going to receive a table in "American Dream Factory", referring to it as "their green mistress" and moving Stan's desk to the bathroom so it could be close to the water cooler.

Bullock was highly skilled in hand to hand combat and showed remarkable reflexes for a man his age. He proved capable of holding his own against Stan Smith in a fist fight in "Bullocks To Stan". In the same episode, Avery also revealed the ability to lift Jeff Fischer with two fingers and hurl him against a wall. 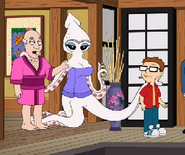