Barbara Gordon is the daughter of Gotham City Police Commissioner James Gordon and a close friend of Dick Grayson since their early teens. Gordon always beat Grayson in challenges leading him to conclude she was ridiculously good at everything. She is an accomplished gymnast and attended Gotham City Academy. When Grayson took a photograph of Artemis Crock, Gordon seemed mildly annoyed. On December 1st, Gordon attended Grayson's 14th birthday and demonstrated her ability to beat him at everything. During a game of Seven Minutes in Heaven, Gordon chose Grayson and kissed him. However, they were never a couple as Gordon didn't believe he was ready for her. As of Team Year Five, Gordon was now a member of the Team as Batgirl and one of Batman's proteges. She isn't afraid to take on a leadership role but also has a bit of a playful side, often pushing Nightwing's buttons.

Near the end of February 17th, Team Year Five, Batgirl reported for duty in regards to the mission involving the kidnapped archaeologist Dr. Sandsmark and the fragments of the Tiamat statue. On December 1st, Team Year Five, Batgirl was assigned to Beta Squad in charge of protecting Noor Harjavti while she raised funds in Metropolis. However, the unexpected appearances of Brainiac and Kylstar changed things. Batgirl, Bumblebee, and Beast Boy kept watch on Harjavti. As Batgirl mused the worst was over, Brainiac's Ship appeared over the city. Batgirl remained at the edge of the sphere and held position to maintain contact with those outside. At 17:30 EST, Match surfaced near Batgirl.

After about an hour, once everyone else in the park evacuated to safety, Batgirl moved on with trying to neutralize Match without getting killed. She created a smoke screen with a capsule then covered Match's head in a substance. Batgirl was tossed into the force-field sphere and became unconscious. Match ripped her cape off his face but passed out from the lack of oxygen. At 18:33 EST, Black Lightning and Jim Harper returned to Batgirl's position and helped her up. She gave Beta Squad the orders to shut down the force field generator probe. On December 2nd, 00:16 EST, Barbara Gordon and Dick Grayson celebrated his birthday.

On January 1st, 18:23 Eastern Standard Time (EST), Team Year Six, Batgirl and Wonder Girl were sent to New York City's United Nations Headquarters. While Wonder Girl fought Lobo, Batgirl took Secretary-General Tseng down a secret elevator to the General Assembly. However, the two heroes were no match for Lobo. On January 5th, 05:57 Eastern European Time (EET), Batgirl was assigned to Beta Squad and investigated a Krolotean base in Vlatavastok. On January 6th, she participated in a joint mission to Malina Island. On January 26th, she was present when Batman left with some of the Justice League to Rimbor in order to clear their name. On February 19th, Batgirl was assigned to an all-female Alpha Squad sent to Bialya to find any alien technology matching the alien bomb from Malina Island. She noticed scarab imagery in ancient symbols and hieroglyphics on cavern walls and recorded a file. Batgirl's piloting skills proved crucial when a plane holding kidnapped teenagers was discovered.

On March 30th, Gordon infiltrated a shipment of teenagers with Tim Drake in Star City. They arrived in a Reach Ship and went forward with liberating kidnapped teenagers. Among them was Shimmer who quickly sided with Black Beetle. Gordon easily defeated her in combat and met up with Nightwing. She handed over an unconscious Bumblebee and instructed Nightwing to ready the Bioship. In the narrow escape, Gordon had the Bio-Ship sealed off. Lagoon Boy returned with Blue Beetle in tow. On May 26th, Batgirl and Robin were assigned to Delta Squad and manned the Bio-Ship to provide cover fire during the Warworld offensive. On June 13th, 20:30 EDT, Batgirl and Impulse observed Blue Beetle in Metropolis. At 20:40 MDT, they engaged him in El Paso. Batgirl grappled one of his legs while Impulse attacked. Batgirl then doused Blue Beetle in knockout gas but was pinned down. Batgirl and Impulse were merely decoys. Zatanna and Rocket captured Blue Beetle. They took him to the secret Bialyan facility as part of a plan to put his Scarab off-mode. Batgirl faced off against Shimmer briefly.

Batgirl took part in attacking the Santa Prisca summit on June 19th. On June 20th, Batgirl was assigned to Pi Squad with Zatanna and took out one of the Magnetic Field Disrupters activated by the Reach. After Nightwing submitted his leave of absence, he reminded Aqualad Batgirl was willing to stand up to help lead the Team. As of July 4th, Batgirl found a possible lead on Vandal Savage's next move. Gamma Squad was formed with Aqualad, Batgirl, Lagoon Boy, Robin, Wonder Girl, Blue Beetle, and Static to investigate. 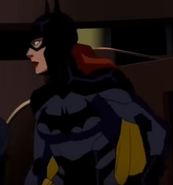 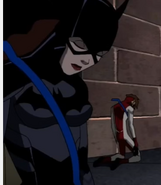 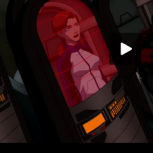