Barbara Gordon was the daughter of Gotham City Police Commissioner James Gordon. She took on the mantle of Batgirl, and became Batman's partner and protegé for many years. Later in life, she followed in her father's footsteps by becoming the Commissioner of the Gotham Police Department herself.

Barbara was the last of Batman's partners to relinquish their roles. She was also the girlfriend of Bruce Wayne for an undetermined period after the Joker had tortured Tim and found out his secret identity. She would eventually become police commissioner as her father had been. The details of her rise to the position of police commissioner are unknown. Over the years, she lost touch with Bruce Wayne.

According to Barbara herself, the fact that Bruce Wayne's drive wouldn't allow him to "settle down" from his life of crime fighting eventually drove a wedge between them, and their intimate relationship was terminated after a time. She eventually went on to marry District Attorney Sam Young. Whether or not she told her husband about her time as Batgirl is unknown.

She came into contact again with Bruce when she found out he had a new partner and got a call from Bruce. She then looked out the window to see the "get acquainted gift" Batman left her. It was the pieces of Inque, trapped in the ice.

Initially, Barbara was distrustful of the second Batman, Terry McGinnis; this distrust was stressed when Spellbinder used his technology to make her believe that Terry had killed Mad Stan. She also expressed a measure of resentment towards Bruce for not talking Terry out of becoming the latest Batman. At first, she strictly refused Batman's help and warned him to stay out of police matters. She mostly had anger towards him due to her old grudge towards Bruce and his decision to stop her from helping him and to continue doing it at his age. When the assassin Curaré targeted Barbara’s husband District Attorney Sam Young, a joint effort from herself and Terry stopped the planned hit.

During this incident, Barbara saved Terry's life by throwing a discarded batarang at the killer, amazed she still "had it". Barbara then welcomed Batman back to fighting crime in her city. Barbara eventually formed a mentoring relationship with Terry, even helping him on occasion, especially when the Joker returned and had attacked Bruce in the cave. As she was one of the few trustworthy people who knew Bruce's secret, she was the person Terry contacted after Bruce was hurt in the Batcave and she likely helped him treat Bruce. As Bruce recovered, Barbara briefly took over Bruce's role, sitting behind the mainframe in the Batcave providing guidance to Terry in the field.

Barbara went to Sam's house to tell him to relax, but was insisted upon by him that he needed to put Dr. Cuvier out of commission. Three spliced thugs attempted to have her husband killed, leading to a melee in her home with Cuvier's minions. Barbara managed to fight off Tigress, but she was soon captured. Fortunately, Batman arrives and attacks the thugs. Barbara calls up Bruce and tries to warn him of Terry's condition, as a mutated, out-of-control Batman, but it's too late. Terry arrives now greatly resembling the Man-Bat. Ace desperately attacks him and is hurled away. Terry then attacks Bruce who only manages to escape thanks to Ace's intervention. After escaping, Bruce hits him with a dart filled with the cure for splicing.  After Terry was returned to normal and Cuvier was defeated, Barbara personally encouraged Terry (who had recently avenged his father's death) to give up his life as Batman. However, Terry was undeterred, and answered that the small rewards were sometimes the best.

The police once went to Miss Martel's apartment and found her tied up. Finding evidence that pointed to the school, Barbara confronted Bennett. He explained that the robot was an assassin droid called "Zeta" and it had stopped taking their orders. Because Zeta was at the time on an assignment to infiltrate a terrorist group, they assumed it was now taking orders from them and must destroy it, whatever the civilian cost. After Bennett left, Batman talked to Barbara and she explained that it was most likely that Zeta was still at the High School.[19].

Knowing that the shooting would not go unnoticed, Major had his goons pack up his valuables and run. Major was unconcerned that he was leaving without Big Time since he figured Big Time would be easy to find. Major and his gang tried to drive off, but ran into a police barrier. They realized that someone tipped off the police, but Major was sure that it wasn't Big Time. Major and his thugs, determined not to be taken in, started a shoot out and Major tried to escape but Barbara stopped him.

Later, Terry and Barbara went to Charlie's hiding place and found that he was gone.

In addition to having a Batsuit like Batman, she also has access to most of his various tools used to fight crime, most notably the Batarangs. She, like Batman, has a Utility Belt with items and tools stored in it that accommodate her needs. 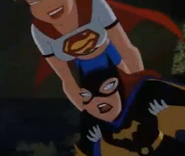 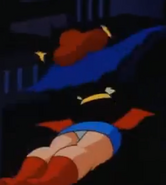 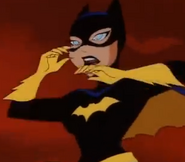 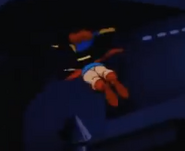