Barbara Gordon is the daughter of Commissioner Gordon. She is a librarian at the Gotham Library but also helps with tech projects at the Gotham City Police Department. She later became Batgirl and partnered with Batman for almost three years. Unlike Batman,

she found fighting crime to be exciting. During most meetings between Batman and Commissioner Gordon, Batgirl kept her distance to avoid any suspicion of her secret identity. She observed from the side of a nearby water tower with her binoculars. Batman apprised her over comms there was a robbery. They joined the pursuit of armored car thieves led by Paris Franz, a narcissistic sociopath who was the nephew of Gotham City's biggest crime boss, Carlos Francesco. Batgirl landed on their big rig truck and planted an exploding Batarang above the rear cargo doors. Once the doors burst open, Batman extracted the armored car with the Batmobile's harpoon. Batgirl jumped to the front and hung precariously. Franz blew her a kiss then kicked her to the street. One of Franz' men stumbled out of the cargo hold and pulled a gun on her. She started "negotiating" and pointed out he didn't want to turn a robbery into a murder.

Batman swerved the Batmobile and tapped the thug. He awoke the man with smelling salt and requested time alone. Franz developed an obsession with Batgirl. At work the next day, Gordon worked on the program for the police's city cam project while her co-worker Reese wondered why she didn't have a boyfriend. Gordon admitted she was sort of involved with someone. While she cycled through camera feeds, Gordon spotted Franz breaking into a warehouse. Batgirl went alone and confronted Franz. She distracted them by dressing a bust and yanked a thug up to the ceiling with rope then she swatted Lonny's gun away and put him down with a punch to the gut. Franz was impressed and fought her hand to hand. She dismissed him as just another punk amateur. He sprayed her in the face. About to lose consciousness, Batgirl ran into the vault nearby and sealed herself inside. Franz and his men fled the warehouse with an undisclosed sum of cash.

A few minutes later, Batman found Batgirl on the roof across from the warehouse and gave her a coffee. Batman believed she should have waited but Batgirl countered they were about to leave and she had to do something. Batman briefed her on Franz and ordered her not to go near Franz without him. She took offense to the order and questioned him. Batman reiterated if she wanted to work with him, she had to do what he said then fired his grapnel gun and left. At the library, Gordon told Reese about her 'controlling yoga teacher' and that he would never say she was her best student. Reese advised to just find another class. Gordon knew there wasn't any other 'class' and went into a tirade about her teacher starting to make decisions based on his emotions which he didn't have to begin with. The patrons stared at them. Franz avoided an attempt on his life by his uncle and recorded a video for Batgirl. The police turned it over to Batman and he showed it to her.

Franz hinted he came into some family money and left a gift for her where they first met. Batgirl was a little flattered but Batman knew it was a trick. He preferred his query to be afraid and nervous, which Franz wasn't. He benched Batgirl from the case and left for the warehouse Franz broke into. Batgirl wanted to use Franz' obsession against him and chased after the Batmobile on her motorcycle but realized they first met on the big rig truck. She turned around and went to the police impound lot. She discovered a gift wrapped cell phone in the truck. She dialed it and Franz told her the real gift was still out there. She humored him but was led to Francesco's office building where she discovered his bullet-ridden corpse. Batgirl was forced to flee his men and tried to get to the seventh floor elevators but there were too many. She took cover behind furniture. Luckily, Batman emerged from the elevator and dispatched everyone.

Batman admonished her for letting Franz play her like a lap dog. Batgirl insisted she knew what she was doing the whole time and was doing what he does, hunt. Batman believed she was trying to prove something and letting her ego cloud her judgment. Batgirl thought they were partners. Batman stated they were but weren't equals then warned her she still saw it as a game and hadn't been taken to the edge of the abyss yet by a case. It was a place where you don't care anymore and all hope dies. Batgirl wasn't interested in his metaphysics and thought he was being protective and sitting in judgment. Batman advised her to quit. Batgirl was infuriated and stated she was in it because of him and did what he wanted. She attacked him. She eventually landed a kick, flipped him, and pinned him to the ground. She kissed him and they had sex. The next morning, she was filled with regret. A few nights later, Gordon admitted to Reese she had sex with her teacher and it was like fireworks but they hadn't talked since. Reese advised her to just talk to him.

Barbara Gordon left a diner after watching a local news report about the manhunt for Paris Franz. She overheard a couple arguing outside about space. Gordon was irritated and tossed the boyfriend into the bushes. That night, Batgirl sat atop a water tower and consulted with pigeons about calling Batman or not. She activated the communicator. Batman revealed he was the docks searching for Franz based on a new tip he was hiding out there. Batgirl offered to help but he turned her down. Batgirl asked if they were back in business after Franz was arrested. Batman only said they would talk later. Batgirl asserted it was just sex and it didn't have to mean anythinga and pleaded with him for things to go back to the way they were. He repeated they would talk later and hung up. Batgirl heard and saw an explosion come from the docks. She rushed over on her motorcycle. She picked up a heavy rope with a hook attached and knocked Lonny out then used it to drag Franz into a stack of crates. Franz relished being alone with her at last.

Batgirl declared he ruined everything and lost control. She beat him senseless. When she stopped, blood was all over her gloves and she turned to Batman. The next morning, Gordon drank her coffee and watched a loving couple cross the street outside her apartment. Franz was hauled to arraignment declaring his love for Batgirl. Gordon came to a decision. She was going to retire from being Batgirl. She met with Batman on a roof and gave him a bag filled with her gear. She admitted she understood he couldn't protect Gotham and someone he cared about at the same time then said she saw the abyss he talked about. It was tempting to her and she didn't know how he resisted it. She told him to be careful and left. A week later, Gordon finished jogging through a nearby park and came home just in time to answer a call from her father. He informed he father-daughter night was cancelled because he had to do a favor for Batman. He visited her later that night. While he cut out a Joker article from the Gotham Examiner's March 8 Daily Bulletin, she made him cocoa.

Commissioner Gordon worried about the Joker and suggested he needed something stiffer. She asked him to leave work at the office for once but offered to work out a filing system for him like she used at the library. She had found his Catwoman scrapbook behind the wardrobe then warned him he was going to get paste on his pants. He remarked she was fussier than her mother. She heard a knock at the door and assumed with was her workout buddy Colleen Miles. She answered but it was the Joker in a gaudy tourist outfit. He pressed his gun to her stomach and shot her. As she clutched her wound, Joker's thugs beat up and took the Commissioner away. She managed to ask him what his plan was. Joker hinted he was topping the bill and he had a point to prove. He raised his glass and made a toast to crime. He undressed her and took photos. Miles discovered her and called 911. Batman and Detective Bullock were present in her hospital room when a physician tested her reflexes. He gently poked her feet with a needle but got no response. He reported she would never walk again.

Batman asked for a moment alone. She woke up and panicked about her father. She frantically told her what Joker said and worried about what was going to happen to the Commissioner. After the incident, she recovered and became used to using a wheelchair. She took up extracirricular sports like lacrosse and planned to try something called wallball. She returned home from a lacrosse game while talking to her father via a wireless earbud. She noticed a crooked frame and fixed it by tossing her ball at it. She declined her dad's suggestion to spend the night together citing she already had plans. She went to a mirror and pressed a button on her arm rest. It opened and her secret room, filled with tech, came to life. She went to her keyboard and went to work under her new codename, Oracle. 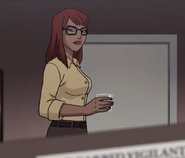 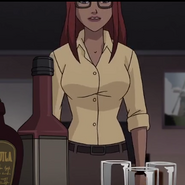 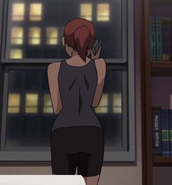 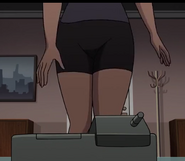 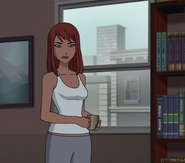 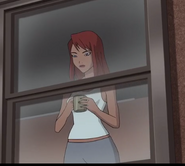 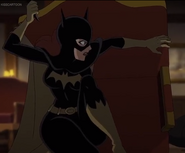 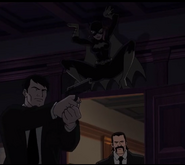 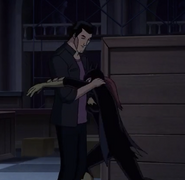 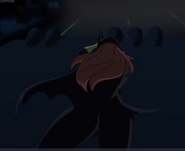