Baron Helmut Zemo is a German nobleman and Hydra leader, and is a major antagonist in Season 3, Ultron Revolution.

Baron Helmut Zemo was a nobleman and scientist whose father was Baron Heinrich Zemo, one of the founders of Hydra. He sought to carry his father's legacy and recreate the super-soldier serum and create an army powered by the serum. Zemo attempted to formulate his own version of the serum, but it was imperfect, leading his test subjects to turn into hulking abominations. Thus, Helmut resolved to find his father's perfect serum to achieve his goals.

To achieve this goal, the now-elderly Zemo placed his father's old nemesis Captain America under a special state of hypnosis that forced him to relive his final days with Bucky during the war against Hydra. Zemo followed Captain America to Castle Zemo in order to find his father's version of the super soldier serum, but was briefly interrupted by Iron Man and Black Widow. Injecting the two Hydra soldiers flanking him with his crude serum, he followed Captain America to his father's laboratory, where he injected himself with the super soldier serum and youthanized himself, also taking the other remaining vial of the serum for his own use. Donning a hood reminiscent yet different from his father's, Zemo fought the other two Avengers, easily able to handle them due to his enhancements. However, Captain America broke out of Zemo's mental control thanks to Bucky materializing himself as Cap's conscience telling him that the events playing out in his mind weren't the ones that actually occurred. Captain America joined the fight and was evenly matched with Zemo until the baron fired his pistols at the walls of Castle Zemo, causing it and the cliffside they fought on to crumble. Zemo leapt after the serum that fell out of his suit, with Captain America in hot pursuit. As both super-soldiers fell, Cap quickly grabbed Zemo's hand, but Zemo refused his help to pull him up, stating he wanted to maintain his father's legacy, forcing Cap to release his grip. Zemo fell into the rocky waters, but Iron Man's scans showed that he had disappeared. 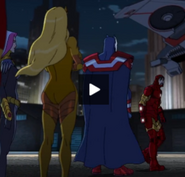 Add a photo to this gallery
Retrieved from "https://xianb.fandom.com/wiki/Baron_Helmut_Zemo?oldid=331675"
Community content is available under CC-BY-SA unless otherwise noted.