Bonnie was first seen with her brother Clemont in Lumiose City. Both were standing outside the Prism Tower when they watched Ash go inside to challenge the Lumiose Gym. When Ash was ejected out of the building, Clemont saved Ash with his Clemontic Gear while Bonnie saved Ash's Pikachu by catching him before he hit the ground. Thinking that he was cute, Bonnie hugged Pikachu, who shocked her in retaliation. Bonnie quickly apologized and explained that she is too young to have her own Pokémon and therefore always becomes excited when she meets one. Though she cannot own a Pokémon, she participates in other activities when she can. When Clemont and Ash had a battle against each other, she refereed the match for them. She later led them to Professor Sycamore's lab when Froakie was injured by Team Rocket.

In Lumiose City Pursuit!, Bonnie met Professor Sycamore's Garchomp and played with the professor's other Pokémon, before Team Rocket infiltrated the lab. Bonnie tagged along with Ash and Clemont to help free the enraged Garchomp from the machine controlling her, and Bonnie watched her brother use one of his inventions to break in to the Prism Tower.

In A Battle of Aerial Mobility!, Bonnie and Clemont officially decided to accompany Ash on his journey through Kalos. Later in the episode, the group encountered a wild Dedenne. Bonnie asked Clemont to allow her to keep Dedenne, and Ash agreed, Bonnie tried to offer a berry to Dedenne, but a wildFletchling stole the berry, scaring off Dedenne in the process. She later watched with her brother as Ash caught the Fletchling. After it was caught, Bonnie scolded Fletchling for stealing Dedenne's food but quickly forgave the Pokémon. Dedenne was later seen following Bonnie and the others.

Then, in A Shockingly Cheeky Friendship!, Bonnie met the Dedenne from the previous episode when it stole the food she was trying to feed to Pikachu and Fletchling. She begged Clemont to capture it for her, but Dedenne forced the group to chase it in several holes in the ground, which caused Dedenne and Pikachu to get lost together. Eventually, Pikachu and Dedenne returned, but a previous encounter with Team Rocket left Dedenne exhausted to the point of fainting, much to Bonnie's horror. After Dedenne was rejuvenated by one of Clemont's inventions, it bonded with Clemont and helped defeat Team Rocket. Afterward, Dedenne allowed Clemont to capture it so that Bonnie could keep it in her satchel. 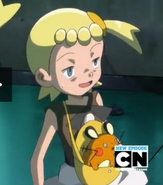