Bonnie Swanson is the wife of Griffin neighbor Joe Swanson, and mother of Kevin and Susie Swanson. Bonnie was originally pregnant for the first 116 episodes until giving birth to daughter Susie Swanson in "Ocean's Three and a Half", and quickly lost the baby weight. She has curly black hair, which was auburn in her first appearance in "A Hero Sits Next Door", light olive skin and wears a purple dress. Bonnie is voiced by Jennifer Tilly.

Bonnie is much calmer than her husband Joe but usually fails in her attempts to quell his outbursts. She once said in "A Hero Sits Next Door" that she can't ever say no to her husband. This changes when Joe gets new legs in "Believe It or Not, Joe's Walking on Air", becomes a jerk and leaves Bonnie. She then tries to shoot him in the back, crippling him, but misses several times, which then reduces Joe to shooting himself.

Their marriage begins to show signs of being strained in "Foreign Affairs" when she takes a trip with Lois toParis, France to have an affair when she feels her marriage to Joe is growing stale. Lois calls Joe and he convinces Bonnie to come back. Joe considers having an affair of his own in "Internal Affairs", resulting in Bonnie leaving him. After Joe recounts how he met Bonnie as a stripper, Peter and Lois use the information to successfully get them back together. Bonnie appears to take out aggression on the shooting range at a handicap target in "The Most Interesting Man in the World". In "Brian the Closer" she chooses a house that specifically leans on its foundation toward a sheer cliff with a sliding glass door.

She is played by Valerie Bertinelli in the movie Rolling Courage: The Joe Swanson Story in "Ready, Willing, and Disabled".

In "A Very Special Family Guy Freakin' Christmas", she told the story of her husband's accident. In "Road to the North Pole", she requested platinum-plated silverware from Santa Claus for Christmas in the song "All I Really Want For Christmas".

In "Stewie Kills Lois", Peter re-enters the dating world following Lois's disappearance. With Joe's consent, Bonnie is one of the women with whom Peter goes on a date.

In "April in Quahog", Bonnie had sex with Quagmire with Joe's permission after Quagmire lied and said he was a virgin.

In "Go, Stewie, Go!", Bonnie admits to Lois that she had an affair with some guys from internet.

In "New Kidney in Town", she was one of the many who Peter shouted out to while on The Price is Right.

In "And I'm Joyce Kinney", after Joyce Kinney had done her exposé on Lois, Bonnie goes over to the Griffin home to call Lois a slut.

In "The Hand That Rocks the Wheelchair", she employs Meg Griffin as babysitter for her daughter and husband while she goes out of town. 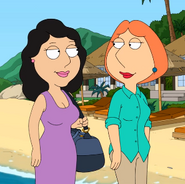