Alcohol
Brian Griffin is an 8-year old talking white Labrador who has lived with the Griffin family since Peter picked him up as a stray. He also possesses various anthropomorphic qualities, such as the ability to speak intelligently, drive a car, and walk bipedally. Earlier in the series, he used the catch phrase "Whose leg do you have to hump to get a dry martini around here?". He also has a particularly sharp wit. Peter is his best friend, despite Brian's vastly superior intelligence - on several occasions, Brian has had to explain Peter's inability to do various things, such as haggling over prices. In "Brian Goes Back to College", it is revealed that Brian went to Brown University in Rhode Island, but did not graduate.

Brian has a cultured background; he loves opera and jazz, and is a fan of John Coltrane. Brian speaks fluent French and Tagalog, and is competent in Spanish. He is also a member of MENSA. He loves to sing and can imitate a barbershop quartet without accompaniment. He is also an avid writer, having once been invited to write for The New Yorker, although he was fired once the magazine learned he did not graduate from college. He has also written a novel, although has made little progress other than the title Faster Than the Speed of Love, and a synopsis similar to the film "Iron Eagle III", for which Stewie and Lois mock him, and this subject has since been brought up several times throughout the series. He is a smoker, an alcoholic and recovered cocaine addict. Brian discovered that his cocaine habit stemmed from his mother abandoning him for which he saw a therapist. He has also made references to either buying, being in possession of, or smoking marijuana in numerous episodes. In "420", he actually does a whole dance to the song A Bag of Weed. In "It Takes a Village Idiot, and I Married One", it is revealed he has a Ziggy tattoo. It is shown in "Brian & Stewie" that he keeps a gun just in case he wants to commit suicide.

In "Stewie Griffin: The Untold Story", Stewie traveled to a future where he learned that Brian died. Brian is seen in heaven at a table drinking martinis with Vincent van Gogh, Kurt Cobain, and Ernest Hemingway. They then all say that they killed themselves out of passion for various reasons. He then admits that he ate some chocolate out of the trash can.

Family Guy: Brian's explanation of why he's washing the sheets (that he soiled). 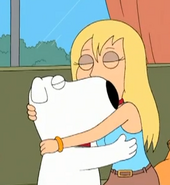 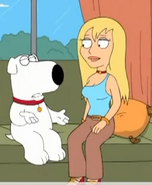 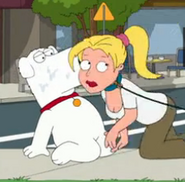 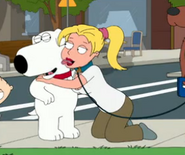