Sober
Principal Brian Lewis is the head principal at Pearl Bailey High School and father of Janet Lewis. In "An Apocalypse to Remember", he is seen sitting with a woman and younger child at the Chicken or Fish Banquet Hall. In "The Worst Stan", it was revealed that he was in prison where he acquired Tracey Bryant as his "prison wife" after beating up Tracy's then current "husband". Stan beats up Brian to acquire Tracey so that Brian's planned wedding to Ellen Riggs may proceed but the wedding is stopped by Stan and Ellen marries Tracey herself.

Throughout the series, Lewis has done and said many very disturbing actions within his role as a principal. 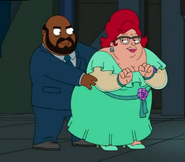