In Season 2 - Season 5, Britney was a minor but important character. Britney was the newest recruit to WOOHP and was introduced in the episode "Alex Quits". Britney is voiced by Lindsay Ridgeway in Season 2 and Stephanie Broschart in Season 3-Season 5.

She wears an azure colored Catsuit.

Britney is the main focus of two episodes. In "Alex Quits", she is introduced by Jerry. Alex quickly becomes jealous of Britney, believing that Britney was sent to replace her. In "Escape From WOOHP Island", the spies are sent to rescue Britney after her plane crash-lands on an island rigged to explode. She also makes a cameo at the end of "Evil Promotion Much?" as one of the agents in suits during the spies' promotion ceremony.

In season 5, Britney has her own three episode (#115-#117) story arc in which she joins Sam, Clover, and Alex, both in missions and at Malibu University. Alex's jealousy prevails until it is revealed that Britney sees Alex as a role model, and thus the two form a sisterly connection. She is also shown to view Sam, Alex, and Clover as her best friends, and it is hinted that the four interact quite often off camera. At the end of episode #117, Britney is assigned to WOOHP Australia, and partnered with Blaine, much to Clover's disdain.

While attending Malibu University, she is not aware of Mandy and Mindy, confronting them in "Virtual Stranger".

Britney returns in the season five finale "Totally Dunzo". Though WOOHP is being shut down, the girls say they will still get together for parties, including Britney in the gathering. Britney, Blaine, and Dean are captured by Mr. X. After being freed, she assists the others in fighting the drones but is quickly defeated, leaving Sam, Clover, and Alex to finish the final battle.

Britney has a cheerful personality and was a captain of her cheerleading squad and loves to play chess (a reason that Sam and Clover have taken a liking to her). She is also shown to be very intelligent and is also very skilled, but this trait of hers made Alex become jealous of her at some point during many occasions. Of the three, Britney lives on her own at the apartment, as she manages to support herself. As seen at Malibu University, she does not seem to be very fond of Mandy and Mindy, but she only confronts them when they were trying to expel the girls from the dorm.

Britney has bright dark blue hair down to her waist and violet eyes, and light tanned skin but less tanned than Alex. Britney has a similar physical build to the other three spies and seems to be an average build for a girl of her age. 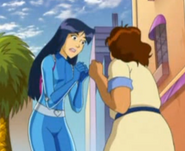 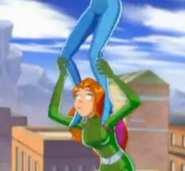 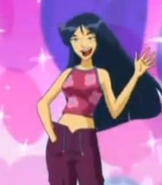 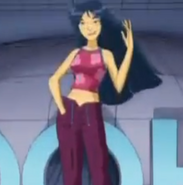