He is a former Pokemon Gym Leader. He is studying to become a Pokemon Doctor. His dream is to become the worlds greatest Pokemon Breeder. His father is Flint

Brock is considered the most mature, wise, and level-headed of the main characters. He often acts as an older brother and caretaker to the other characters and a voice of reason in disputes. He will usually place others before him and will help and support his friends even against his better judgment or at his own expense. While he is not shown to battle often, he can understand the situations and strategies in any Pokémon battle, and often explains them to the other characters (and to the viewer), probably because he was once a Gym Leader. Brock always carries books and maps with him, and thus is usually the character who knows where the group is headed and what they can do when they get there, though in Advanced Generation, this role was mostly taken over by the Pokénav. He also carries a lot of other supplies, such as potions and cookware, as well as practical tools like a brush and pocket knife. He is a domestic, and grooms not only his Pokémon but also those of his friends with whom he travels. He handles all the cooking and cleaning for his friends.

Brock is the tallest of main characters, and the closest to looking like an adult. Next to actual adult characters, however, it is clear that he is still a teenager. Not counting temporary outfits, he has worn three different outfits over the span of the anime, all of which have had the colors orange, green, and brown, with blue shoes. His goals have played a passive role in his character's activity and development. Unlike other characters, who aspire to achieve and excel in competitive fields like Pokémon Training and Pokémon Contests, his aim to become a great Pokémon Breeder is a quiet one and thus does not get showcased frequently. His other goal is to find a girlfriend as seen when he tries to ask Nurse Joy or Officer Jenny out or any other pretty girl he sees. Brock's most notable feature is that his eyes naturally appear closed. He also has tan skin, notably darker than the skin of any other major character in the series.

Not much is known about Brock's early childhood, except that his first Pokémon was an Onix he received as a gift at the age of 10. Sometime after, his father Flint left home to become a great Trainer. When he never returned, his mother Lola left them as well, leaving Brock to take care of his siblings, as well as their house and the Pewter Gym, by himself. However, Flint eventually returned home considering himself a failure, and instead of returning to his family he donned a disguise and sold rocks as souvenirs at the edge of town. After Brock awarded Ash the Boulder Badge, Flint came forward and confessed who he was. Flint took on the responsibilities of the Pewter Gym and his family, leaving Brock free to journey with Ash and Misty.

Brock only became the Gym Leader because he felt it was his responsibility, and he admitted to Ash that he would rather care for Pokémon than battle them. It was his dream to become a great Pokémon Breeder, and when Flint took back control of the Gym, Brock was allowed to start following this dream. Most notably, he took care of a Vulpix that belonged to a Breeder named Suzy. Shortly before Vulpix was returned, Brock used it in a Pokémon breeding competition.

Brock was also able to meet and make advances towards the many beautiful women he met. At first, he was more casual about approaching women, such as the Officer Jenny in Cerulean City, and more modest as well, such as when he met Melanie. However, he became more open and passionate towards almost all single young women as time progressed.

Brock briefly left the show during the Orange Islands saga to work for Professor Ivy on Valencia Island and so is only seen in a couple of cameos in the second movie. While there, something happened that will probably remain secret as Brock will only huddle and say "that name" whenever he is asked about it. In Destiny Deoxys, he mentioned his work for her, though this line was added in the dub. After this incident, Brock returned to Kanto where he was found by Delia Ketchum, who helped him to regain his strength. Brock then became a rival to Mimey until he rejoined Ash and Misty as the three traveled to Johto. They stayed together for the entire region, but at the end of this journey, the three went their separate ways, with Brock's help requested at home by his father.

Upon his return home, Brock was dismayed to find that his mother had returned and commandeered the Gym, turning the Rock-type haven into a brightly decorated Water-type den. Brock battled her for the honor of Rock types and won, promising his brother Forrest that he would become Gym Leader someday.

After that, Brock returned to follow Ash through Hoenn, along with their new friends May and Max, and then through Kanto again as Ash took on the Kanto Battle Frontier. He left briefly when the Advanced Generation series ended in order to visit his home, but quickly returned to travel with Ash and Dawn in Sinnoh. Near the end of the Sinnoh saga, Brock began to show interest in becoming a Pokémon Doctor, and so, rather than following Ash to Unova to advise him, decided to remain in Kanto to study.

Brock is among the longest-running main characters in the anime, having been present in nearly every episode between Showdown in Pewter City and Memories are Made of Bliss!, with the notable exception of the Orange Islands saga, the final original series episode, the first three episodes of the Advanced Generation series, and the first episode of the Diamond & Pearl series. His tenure is ranked only under Ash and Pikachu, who have appeared in every episode, and Jessie, James, and Meowth, who also have appeared in every episode except for the very first episode, AG120, and a few episodes of the Best Wishes series and the XY series.

Brock made an appearance in SS025 where it was revealed that, while waiting to attend a Pokémon medical school, he has been studying hard at home as well as helping out at the Pewter City Pokémon Center. In the episode, he played a major role in helping Forrest to officially become the Pewter City Gym Leader when it is revealed that his father never informed the Pokémon League of the title change.

Brock returned in SS027, where it was revealed that he had attended the Pokémon medical school and had been sent to Johto to apprentice under a Pokémon Doctor as part of his training. While passing through the town he bumped into Pokémon Connoisseur Cilan briefly, then encountered him again when Cilan took his Pansage to be treated at the town's Pokémon Center after it was injured by a Gyarados. While waiting for it to recover, the two encountered the beginning Trainer Ayumi who was having trouble teaching her Pikachu to use Thunderbolt; Brock was very impressed with Cilan's talents as Cilan helped Pikachu master the move. Later, when the Gyarados that Cilan encountered earlier started to rampage due to being injured by the poacherAmer, Brock spotted that it was injured, so after Pansage's Grass Whistle put it to sleep, Brock was able to quickly treat it. Afterwards, the two said goodbye to each other and continued their separate travels, having never learned their names or that Ash was a mutual friend of theirs.

There had been some debate between members of the fanbase in regards to why Brock was removed from the main cast during the Orange Islands arc, why Tracey Sketchit was created, and why Brock returned later. In an interview with former Pokémon anime director and storyboard artist Masamitsu Hidaka, he stated his own reason why Brock was removed from the cast and why he eventually returned. He revealed that the true reason they replaced Brock is because, once they realized Pokémon was going global, there was a chance that Americans, if not anyone else outside of Japan, would view Brock as a racist stereotype because of his eyes (even though there wasn't an actual complaint yet). So they created a "tall, Anglo-Saxon looking person to be on the safe side". They later replaced Tracey with Brock again once they realized that no one really cared as to what Brock looks like, and actually enjoyed his character. However, this was only stated by Hidaka and not by any other staff member.

A list of Girls Brock has had a Crush on. 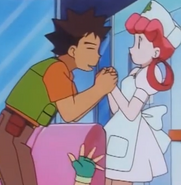 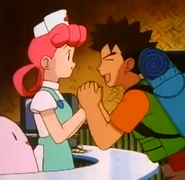 Retrieved from "https://xianb.fandom.com/wiki/Brock?oldid=349080"
Community content is available under CC-BY-SA unless otherwise noted.