While trying out a new suit, Batman responded to a break-in at S.T.A.R. Labs and encountered the Blade Wolf. He pursued it onto a highway but lost it when the wolf caused a big rig truck to overturn. Batman and Nightwing conferred over the Batcom uplink and compared their animal encounters. Batman noted Flash mentioned Killer Croc robbed a copper quarry, not his usual M.O. but Alfred Pennyworth called and alerted him of another animal-related crime in progress at the Gotham National Bank. Batman responded and aided Green Arrow against Silverback and Man-Bat, two new villains, but were interrupted by two Cyber-Animals, the Tiger Claw and Fire Bat. Back at the Batcave, Batman gathered all possible crimes committed by robotic animals. Like he taught Red Robin, a pattern emerged. 11 crimes formed a circle around Oswald Cobblepot's new building, the Aviary.

Bruce Wayne attended the grand opening night gala where he encountered Commissioner Gordon, socialite Gladys Windsmere, and Oliver Queen. Wayne and Queen met Cobblepot and began to suspect more when the Cyber-Animals he presented were the same three from the break-ins. They wanted to question Dr. Langstrom, the creator of the robots, but with Cobblepot keeping a close eye, they opted to plant a tracer on him. Going back to the map of crimes, Batman deduced there was one more break-in left, at the Gotham Zoo. Batman, Nightwing, Red Robin, Green Arrow, and Flash waited and confronted the Animilitia upon their arrival. Batman followed Cheetah into the big cat house and outsmarted her with anticipating her movements and leaving a small explosive in her path. He then tossed a Batarang at her she could catch then detonated it. Batman led Blade Wolf Ace and Tiger Claw on a daring chase in the Batmobile while the others figured out ways to immobilize them. Upon analyzing the robots, Batman concluded they still needed Langstrom in order to hack them.

Batman and Nightwing sneaked into Bumbershoot Mechanics to grab Langstrom but they encountered Penguin, Killer Croc and Man-Bat instead. Batman jumped on Man-Bat and he took flight outside. Noticing the tracer on Man-Bat's leg, Batman realized he was Langstrom. He placed a sonic emitter on Man-Bat's back, rendering him unconscious. Batman switched his cape to a glider and carried Man-Bat back to Bumbershoot. Back at the Batcave, Batman analyzed Langstrom's research and concluded Langstrom was trapped when he transformed into Man-Bat and synthesized an antidote that would work for only three hours. Langstrom willingly complied and helped them understand the Cyber-Animals. When he mentioned they were intended for exploration and retrieval missions, Batman realized Penguin was after the Midas Heart. Batman, in his Turbo Punch Armor, took the Batplane to the force field around the Aviary and met up with the Flash. Batman activated his armor, matched the field's frequency and walked right through the field.

The Penguin sent every Cyber-Animal after Batman but he summoned the hacked Blade Wolf, named Ace, who transformed into a motorcycle. Batman drove around to stall for time while Flash took the shield down and Red Robin neutralized the robots with a computer virus. Batman came up with a bold plan to rewire the antenna and use the Aviary's tractor beam to bring the Midas Heart down even faster and slam it over a bigger force field, surrounding all of the city. Batman's plan succeeded and he discovered Man-Bat's exposure to the tractor beam power surge wiped out all traces of the serum. Langstrom would never transform again. Batman drove off with Ace in a race to the Batcave against Red Robin and Fire Bat.

Green Arrow and Batman ran through a training simulation in the Batcave. Arrow went first and hit every target. Taunting Batman, Arrow was stunned when he hit every target at the same time with exploding Batarangs. Arrow insisted on the best two out of three. Batman, wearing the Battle Armor, fought Solomon Grundy one-on-one near the Gotham National Bank. Grundy gained the upper hand and threatened to crush him with a vault door but Batman activated his Batmobile's Capture Claw. It tackled Grundy across the street and put more pressure until Grundy dropped the vault door on his own head, losing consiousness. In the Turbo Punch Armor, Batman saved Red Robina and Nightwing from a pair of crocodiles in the sewers then gave them breathers to they could finish the battle with Killer Croc. In another training session with Green Arrow, Batman began to sense his ally was cheating when none of his Batarangs were hitting the hard light targets. He threw out 10 Batarangs, waited, then triggered them. The culprit, Flash, was tied up.

Batman and Nightwing fought Silverback in Bumbershoot Mechanics. The villain armed himself with a new weapon equipped with over the shoulder laser blaster and missle launcher and a chest cannon. Batman used his arsenal of Batarangs and Smoke Balls to distract Silverback then managed to knock him on his back with a bola but Silverback broke free with his chest cannon. Nightwing used the time to sneak around and knocked him out from behind. While on patrol, Batman and The Flash sighted Cheetah attacking police officers outside the Gotham National Bank. Flash went off on his own. Batman caught up on Ace and made a hard landing to free Flash of the recently hardened cement he got stuck in. Together, they captured Cheetah in a nearby tunnel. Batman and Red Robin later pursued Man-Bat. Batman jumped on his back and tried to gain control but he made a sharp descent. Red Robin picked him up on the Fire Bat. They fired and wrangled Man-Bat. After knocking him into buildings, Fire Bat pulled back and Man-Bat flew right into Batman and Robin's fists.

Batman chased the Penguin and his henchman in the Batmobile after a big heist. Forced to deal with the henchmen first, Batman dodged their rocket propelled grenades then fired a missile into their transport's rear tires. As the truck overturned, Batman drove under it and neared Penguin's Ice Truck. He dumped his load of ice blocks but Batman cleared them with the Batmobile's Capture Claw then flipped the truck over. Batman and Ace responded to a break in at the Gotham National Bank. After a short car chase, Batman caused the get away car to crash. Batman and Ace split up and rounded up the three bank robbers. Batman chased down the Penguin in the Gotham Zoo. He was saved from a flurry of bullets by Ace. Ace lent Batman his tail, which formed into the Bat Sword. Penguin and Batman dueled sword to sword until Batman elbowed him in the face, disarmed him, and took him out with an uppercut. Batman confronted Mr. Freeze and destroyed his Ice Blast Armor at the cost of his Batplane. After exchanging shots, he overloaded Freeze's gun and arrested him.

Batman arrived on the roof of Gotham National Bank and found Scarecrow and the Joker fighting to a standstill. Tired and out of energy, they wearily raised their arms and surrendered to Batman. Batman, in his Battle Armor, leaped from the Batplane and defeated Solomon Grundy in a swamp near the city before he could harm three fishermen. Batman and Red Robin fought Scarecrow in the Gotham Museum of National History. To his astonishment, Red Robin managed to punch out Scarecrow while under a Fear Toxin induced state of delusion. Batman fought the Joker on Gotham's Boardwalk but was forced to summon the CybeRex to combat Joker's Robo Rampage Armor. Together, they disarmed the Rampage Armor and caged Joker in short order.

I'm getting routine movement function but nothing from higher core processes. I can try to reroute, but this is some next level engineering. Agreed. These things are built to be tough and fast. Langstrom is a genius. Wiring is mostly copper. 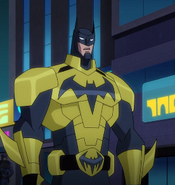 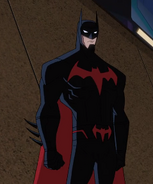 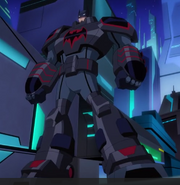