Carolyn is an Atheist that appeared in "Love, Blactually". She dated Brian for three weeks after they met in a bookstore. Brian allowed Stewie to talk him into resisting sex with Carolyn until she finally left him for Cleveland, believing that Brian only wanted friendship. When Cleveland considered marrying Carolyn, Cleveland's ex-wife Loretta Brown asked him to come back to her but he turned her down. Cleveland returned to find Carolyn then cheating on him with Quagmire. Cleveland later found out that she gave him genital warts.

In "Valentine's Day in Quahog", Stewie gathers scores of Brian’s former girlfriends including Carolyn to get to the bottom of why he’s unsuccessful in love.

She is voiced by Kat Foster. 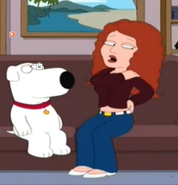 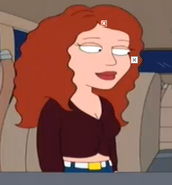 Add a photo to this gallery
Retrieved from "https://xianb.fandom.com/wiki/Carolyn?oldid=260498"
Community content is available under CC-BY-SA unless otherwise noted.