Cassidy is one half of the Team Rocket duo that occasionally runs across Ash Ketchum and his friends in the Pokémon anime.

Cassidy was a recruit in the Team Rocket Academy to become an official member of Team Rocket. During a test she took, Cassidy along with Butch and Raticate as her partners have become the top group of trainees in the Blue Team. She and her partners compete with the Red Team on catching the red-colored Snorlax. Even though neither side managed to do so, they were made into official teams for being successful in Villains in training.

Cassidy made her first non-flashback onscreen appearance in The Breeding Center Secret where she along with Butch build a Five-Star Breeding Center. Cassidy advertises the breeding center in order to attract customers. She and Butch successfully get many Pokémon including Misty's Psyduck and James's Weepinbell.

When Ash and his friends return to the breeding center, they overhear Cassidy reporting back to Giovanni. After Jessie, James and Meowth enter the breeding center, they get caught in the act by her and Butch. While Butch had everyone except Misty, Pikachu and Togepi caged, Cassidy resumes her job as a breeding center worker. Misty disguises herself and she has Cassidy look after her Psyduck to distract her while Pikachu went to get the camera. The Psyduck gets returned and Misty goes to Officer Jenny to show her the evidence. Ash and the others are free. Cassidy battles Ash after her cover gets blown but is defeated by Pikachu and Bulbasaur. She, along with Butch, are taken to jail.

Cassidy returns in Pikachu Re-Volts where it was revealed that she had gotten out of jail and took a Drowzee that was with her and Butch in the fake breeding center. Before Ash went to the Orange Islands, she went to Mandarin Island to do business. Cassidy orders the Drowzee to hypnotize the Pokémon to turn against their Trainers. Ash and his friends have Jessie and James work with them to get the Pokémon back. They managed to infiltrate their base, with Ash and the others demanding Butch and Cassidy to give them back the Pokémon. It was no use as Cassidy once again orders Drowzee to make the hypnotized Pokémon attack their Trainers. Ash forces his Pikachu to attack him in order for the attack to hit the machine. As the machine was destroyed, all of the possessed Pokémon were free and Butch and Cassidy were arrested again.

Cassidy builds a Day Care in The Fortune Hunters and disguises herself as one of the owners. She gives away Fortune Telling books that will tell each Trainer which Pokémon they present. Similar to the fake breeding center earlier, Trainers can drop of one of their Pokémon off. Jessie and James go to the Day Care to steal the Pokémon there. However, they get stopped by the owners who reveal their disguises and get tied up in the process, only for them to escape. Misty goes to the Day Care to find out about her Pokémon type but finds out that it was a fake Day Care as part of the Team Rocket duo's scheme to steal Pokémon. Cassidy manages to catch Misty and her friends from freeing the caged Pokémon. The Team Rocket trio come in with James in his Moltres costume. She battles with the Team Rocket trio first using her Raticate. Raticate didn't do well at first but managed to blast them off in the end. Cassidy notices Ash, Misty and Brock trying to free the Pokémon when they battled the Team Rocket trio. Butch and Cassidy battle them but get defeated by Pikachu, Poliwhirl and Totodile. Afterwards, Officer Jenny arrives and takes them away.

During the Lugia arc, Dr. Namba assigns Cassidy to capture the said Pokémon. She does so by creating a Lugia decoy and manages to capture the child Lugia. With the younger Lugia captured, Dr. Namba has Cassidy capture the parent Lugia using the child as bait. The parent Lugia falls for it but is stopped by Ash's and Ritchie's Pikachu. Cassidy is prepared and uses a contraption called the rage crown invented by Dr. Namba to make a Pokémon go in rage. Cassidy tries it on her Houndour and her Houndour brutally defeats the heroes and catches the parent Lugia without any interference. The gang is also captured as well. In Team Rocket's base, Butch and Cassidy have a rematch with Ash and Ritchie using Pikachu and Sparky, respectively, after they got freed. The contraptions on the opposing side's Pokémon are removed and get defeated by the Pikachu. After their defeat, the duo have a rematch with their rivals in Team Rocket. It becomes a tie as both sides manage to free the parent Lugia and get blasted off.

In Pokémon Chronicles, Cassidy becomes a recurring antagonist, often capturing Pokémon for Dr. Namba's R project. She mostly went for rare and unseen Pokémon but failed to do so after getting defeated every time.

Cassidy appears in True Blue Swablu in Meowth's boss fantasy showing her failing after the trio successfully caught a Swablu. She cameos in The Scheme Team! while riding on a motor scooter and jet packs away when given a mission from a Team Rocket Grunt. Cassidy reappears in The Ole' Berate and Switch! where she hosts a tournament to steal Pokémon, unbeknownst to the participants. She temporarily sides with James after he and Jessie went their separate ways for a little while. Their plan was found out when Max went chasing after Munchlax and stumbled across a room of Poké Balls. Ash along with the other participants managed to stop them, and she and Butch left empty-handed.

Cassidy appeared in Sleight of Sand! where she was after a Hippowdon for Dr. Namba's Hippowdon sand. She went in her Rhyhorn mecha to capture it but she had to compete with Jessie and James's Slowbro mecha first. Both sides got sent blasting off in the end by Hippowdon's Hyper Beam. 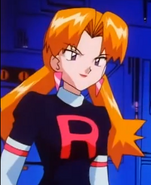 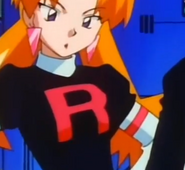