Cynthia (Japanese: シロナ Shirona) is the Champion of the Sinnoh region's Elite Four in Pokémon Diamond, Pearl, and Platinum.

Cynthia was first mentioned in Lucian's flashback in An Elite Meet and Greet!, along with the members of the Sinnoh Elite Four.

She properly debuted in Top-Down Training!, where she was first seen battling against Lucian with her Garchomp on television. She then arrived in person inAmity Square, where she was studying ancient tablets. It was here that she met Ash, his friends, and Paul, who rushed down to Amity Square after they heard rumors of Cynthia being there. Paul challenged her to a Full Battle, but Cynthia won easily. She then mentioned that she was just like Paul in her youth, determined to win with the strongest Pokémon. After the battle, because Nurse Joy was busy, she and Brock personally healed Paul's Pokémon, after convincing him to take them to a Pokémon Center. After this, back at the Amity Square Ruins, she explained something written there means very much to her: "When every life meets another life, something will be born". Later, Ash would think about this quote from time to time. Cynthia then decided to go to Celestic Town, where she planned to study the legend of Dialga, Palkia, and the Lustrous Orb.

Cynthia's next appearance was in Losing Its Lustrous! and Double Team Turnover!, in Celestic Town, where she, along with Ash, his friends, her grandmother Professor Carolina and Officer Jenny's police officers, tried to stop Team Galactic from stealing the Lustrous Orb.

In Aiding the Enemy!, Cynthia battled with Aaron to defend her title of Champion of the Sinnoh region on television, which she won. Ash and his friends commented that while Aaron was strong enough to be a member of the Elite Four, Cynthia was still far stronger than him.

Cynthia then appeared in The Needs of the Three! and The Battle Finale of Legend!, where she helped Ash and his friends protect the lake guardians and put a stop to Team Galactic at Spear Pillar.

In Four Roads Diverged in a Pokémon Port!, Flint revealed that he intended to challenge Cynthia for her title of Champion.

She also appeared in An Old Family Blend!, where she observed the Lily of the Valley Conference alongside Charles Goodshow, making her the first current Champion to appear at a Pokémon League Conference. While watching, she showed a deep interest in the battle between Ash and Paul. At the end of the competition, she personally delivered the trophy to the winner, Tobias, who had won the Sinnoh League and the right to face the Elite Four.

She appeared in Memories Are Made of Bliss!, where Ash and his friends watched her battle with Flint for the title of Champion. Flint's Infernape managed to defeat two of her Pokémon, but Garchomp ultimately defeated Flint's Infernape, earning Cynthia the victory.

Cynthia also had a cameo appearance at the beginning of Arceus and the Jewel of Life, where she was engaged in a battle against Palmer. Cynthia also made a cameo in the credits of Zoroark: Master of Illusions.

Cynthia reappeared in All for the Love of Meloetta!. She met up with Ash again in Virbank City in Unova at an ice cream stand. She told Ash, Iris and Cilan about the Pokémon World Tournament Junior Cup, where she would have an exhibition match. Ash and his friends then decided to go with Cynthia and participate. On the way to the seaport to take a plane to Cynthia's villa in Undella Town, she almost hit an injured Meloetta with her car. She discovered that it was suffering from a fever and gave Ash, Iris, and Cilan instructions on how to make it feel better. She asked Iris and Cilan to find a Berry for it while she and Ash would get some ice. She was revealed to have a Glaceon which used Ice Beam to freeze the water. Cynthia and Ash broke the ice and took it to Meloetta.

After it recovered a little, Iris asked Cynthia if she could battle her and her Garchomp while she used Axew, as Iris was thrilled to battle a Dragon-type she had never met before. Cynthia agreed and the battle got underway. Even though Axew learned Giga Impact during the battle, Garchomp proved to be way too strong for Axew. Just when Garchomp was about to hit Axew with Brick Break, Cynthia stopped Garchomp from attacking and ended the battle before Axew could get hurt. In Piplup, Pansage, and a Meeting of the Times!, Ash and his friends arrived in Undella Town, at Cynthia's villa. Here, Ash was reunited withDawn for the first time since his journey in Sinnoh. After that, Cynthia watched a battle between Dawn and Cilan.

In Jostling for the Junior Cup!, Cynthia was seen talking with Alder in Lacunosa Town, where the Pokémon World Tournament Junior Cup was held. Later, she participated in an exhibition match with her Garchomp against Unova Elite Four member Caitlin and her Gothitelle. The battle resulted in a draw after the battle's 10 minute time limit ran out. She then appeared in Battling Authority Once Again!, where she observed the tournament and helped Iris with Dragonite's problem with listening to her commands and gave Trip some advice. After the conversation Trip thought to himself that after defeating Alder, she would be next. In the following episode, Cynthia was seen watching the battle of Iris against Ash and after the battle, Cynthia talked to Iris about their relationships with Pokémon. In Goodbye, Junior Cup - Hello Adventure!, Cynthia was seen watching the battle Trip was allowed to have against Alder for winning the Pokémon World Tournament Junior Cup. After this, she watched the closing ceremony of the competition. Back in Undella Town, she watched a battle between Ash and Dawn, and later went with the others to wave Dawn farewell when she went to Johto.

She next appeared in Meloetta and the Undersea Temple! and Unova's Survival Crisis!, where she helped Ash and his friends put a stop to Team Rocket's Operation Tempest and saved the Unova regionfrom the Forces of Nature's Therian Forme's rage. She said goodbye to Ash in Beauties Battling for Pride and Prestige! after informing him that the Unova League was starting in a few weeks. Cynthia also made a cameo in the credits of Genesect and the Legend Awakened. 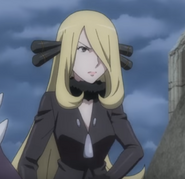 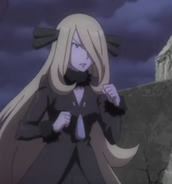