A Member of the Legion of Doom in JLA: Trapped in Time.

Unique Physiology: Cheetah is a humanoid cheetah with a tail, pointed ears and various cat like changes to an otherwise human body. 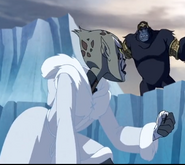 Add a photo to this gallery
Retrieved from "https://xianb.fandom.com/wiki/Cheetah?oldid=342160"
Community content is available under CC-BY-SA unless otherwise noted.