Start a Wiki
Cheetah is a villain transformed into her namesake and given enhanced physical attributes. She and Killer Croc escaped Arkham Asylum and went on a crime spree together. At some point, they were recruited by the Penguin to join his Animilitia team and profit from the Midas Heart asteroid. About three months after her escape, Cheetah was sent to the Jewelry Store to plant a force field transmitter under the cover of theft. Nightwing confronted her thinking she was Catwoman. After Nightwing taunted her, Cheetah hinted she was not alone. Killer Croc came threw the floor and fought Nightwing. She planted the transmitter then defeated Nightwing.

During the Gotham Zoo break-in, Cheetah fought Batman at the big cat house. She mocked him for trying to bury his animal instincts and attacked. Batman eventually figured out her pattern and left an explosive on the tree trunk before he leapt away. Cheetah was sent plummeting to the ground. Batman threw a Batarang which she easily caught then he detonated it. Cheetah fled the scene with Silverback as Fire Bat lifted him away. At Bumbershoot Mechanics, Silverback and Cheetah went after Green Arrow on the roof across the street. She proved agile enough to slash his arrows in half and later managed to trip the Flash. Shocked at first Silverback really had a mechanical body, she escaped with him. They worked on getting the force field around the Aviary online. The hacked Tiger Claw and Blade Wolf took down the Animilitia. Cheetah was taken into police custody as she declared she shouldn't be locked up like an animal.

Cheetah burst out of the Gotham National Bank and attacked police officers before fleeing the scene on foot. The Flash caught up to her but Cheetah taunted him. She led him on a roof top pursuit then tricked him into stepping into a patch of wet cement. Batman arrived on Ace and freed Flash. Cheetah hurried into a nearby tunnel but Batman captured her with a bola. 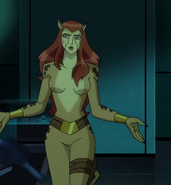 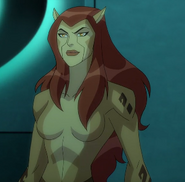 Add a photo to this gallery
Retrieved from "https://xianb.fandom.com/wiki/Cheetah(Batman_Unlimited)?oldid=250307"
Community content is available under CC-BY-SA unless otherwise noted.