Chiaotzu  is a white-skinned, red-cheeked little Human who appears in the Dragon Ball manga, and in the animes Dragon Ball and Dragon Ball Z, also making short cameos in Dragon Ball GT. He is the constant companion to Tien Shinhan, his best friend, and along with Tien, he was one of Master Shen's students.

Five years after the defeat of Piccolo Jr., after learning that Goku sacrificed his life to defeat the saiyan Raditz, Chiaotzu is summoned along with Tien Shinhan, Krillin, Yamcha and Yajirobe to train at Kami's Lookout for the battle against Vegeta and Nappa. After completing Kami's training, he then continues to train with Tien until the Saiyans arrive on Earth. As Tien and Chiaotzu make their way to the battlefield, Tien requests that Chiaotzu stays behind. Chiaotzu begins insisting that he too has trained hard, thus earning his right to participate in the fight. Tien continues to pressure Chiaotzu into staying, however Chiaotzu refuses and continues with Tien along to the battlefield.

Both Chiaotzu and Tien arrive at the battlefield prior to the fight beginning, but just before Yamcha does. Despite the Z Fighters agreeing with Vegeta to challenge the Saibamen one at a time, Chiaotzu and Gohan do not get their chance to take on any of the Saibamen.

After Yamcha is killed by a self-destructing Saibaman, and the remaining Saibamen were destroyed by Krillin and Piccolo, Nappa decides to challenge the Z Fighters himself. Whilst he powers himself up, Chiaotzu attempts to use his Telekinesis attack on Nappa, but he proves too strong for the attack to have any effect. As Nappa finishes powering up, he charges at Tien and proceeds to cut off his left arm. Chiaotzu is horrified, as he sees the mighty Saiyan brutally attacking his best friend before his eyes. After Krillin recovers from the aftershock of a Blazing Storm from Nappa, he looks around in fear that Chiaotzu was taken out by the blast. Vegeta tells Nappa to look behind him, as Chiaotzu latches himself upon Nappa's back, thus making himself a living bomb. The gigantic Saiyan struggles to remove him. After Chiaotzu telepathically says goodbye to Tien, he detonates and kills himself, in a hopeful attempt to save his friends. However, Nappa surprises the Z Fighters by smugly reappearing from the smoke unfazed, and with a small amount of damage being done to him. Tien and Krillin are then left in anger at the fact that Chiaotzu's attack did not faze Nappa at all, and thus Chiaotzu's suicide attack was in vain.

Because of the influence of Kami, after he perished, Chiaotzu's body was regenerated by Kami and was allowed to train on King Kai's planet in the Other World as Goku did earlier. Joining him were the other warriors who also perished in the battle against the Saiyans: Tien, Piccolo and Yamcha. On King Kai's planet, King Kai tells Goku that they all crossed Snake Way in a far shorter time than he did, and that they all requested for tougher training than what Goku had received.

Chiaotzu, along with Tien and Yamcha, remains on King Kai's planet and learns of everyone's (Goku, Vegeta, Krillin, Gohan, Dende and Piccolo fused with Nail) mighty struggle with the evil tyrant Frieza on planet Namek. In a filler scenario, he defeated Guldo of the Ginyu Force with relative ease. He is eventually wished back to life a second time along with Tien by a wish made to Porunga. After returning to Earth, Chiaotzu and Tien go into solitude, training in the mountains.

For reasons unexplained, both Chiaotzu and Tien do not make their appearances in this saga. It can be assumed however that they were both also possessed by the Black Water Mist, and also later changed back to their normal states by the Sacred Water like almost everybody else on Earth.

Telekinesis – Chiaotzu can manipulate objects in his environment through mental power. He uses this technique at Tien's request to rearrange the number tags at the 22nd and 23rd World Martial Arts Tournaments in order to study their opponent's fighting styles, and to stop bullets from aMercenary Clan while he was searching for the Dragon Balls with Master Roshi. He can use it on opponents that are not too strong for him to control. The effects on opponents include paralysis, and directly attacking their internal organs, as revealed in both the manga and the anime. 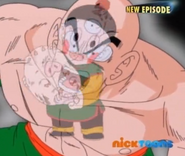