Tenten (テンテン, Tenten) is one of the main characters of the series. She is a member of Team Guy.

Tenten is proficient in using weapons. She is able to measure the perfect distance for attack or defence between herself and her opponent. Tenten also has some basic knowledge of medical treatment.[5]

Tenten specializes in weaponry at a long-range attacks. She usually carries her weapons in a single big scroll and a couple of smaller scrolls. Her arsenal is composed mostly of steel projectiles and her favoured method of attack is to swing her scrolls open to release an unspecific number of weapons. For much better accuracy, Tenten can control and guide her weapons to her intended target. She is also capable of sealing and releasing even the most gigantic weapons in battle to cause masses damage to her opponent. 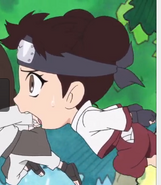