Many of the series' young characters, including Zuko and Jet, are in a class. Aang is feeding a small serpent that looks like a mere seahorse. Katara is writing something on a paper when Azula, Mai, and Ty Lee sneak up behind her. Deciding to pull a harsh prank, Azula shoots lightning at Katara, and she, Mai, and Ty Lee begin laughing at the effects dealt to Katara. At that moment, Roku flames in, informing the class about the upcoming "Golden Dragon Dance" and vanishes in flames. Sokka is torn over who to take: Suki or Princess Yue. The former shows her heart while the latter shows three conjoined hearts. Suki argues that she saw him first and pulls out her fans; Yue, in a deep voice, threatens to use her moon powers. The two girls begin to fight over Sokka. 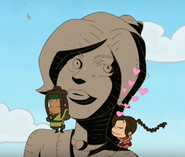