The Village Hidden in the Sand

Sasori of the Red Sand

Sasori of the Red Sand

Chiyo (チヨ, Chiyo) was a retired counsellor ofSunagakure. She was also a famed puppeteer, the leader of Sunagakure's Puppet Brigade and a medical-nin.

Chiyo, often calledHonoured Grandmother Chiyo (チヨバア様, Chiyo-baasama) by the Sunagakure villagers, was the village's poison,[4] and puppet expert. She and her brother Ebizō were highly revered in Sunagakure and were known as theHonoured Siblings (御姉弟, Gokyōdai).[5] Chiyo was very knowledgeable when it came to handling poisons and used her skills often during the Second Shinobi World War, only to be countered numerous times by Tsunade's medical expertise. This caused Chiyo to hold a grudge against Tsunade, who she came to call "that slug-girl" (あのナメクジ娘, Ano Namekuji-musume), or the "Slug Princess" in the English translations.[6] During the war, she also fought Hanzō and his salamander numerous times, learning how frequently it can use its venom and eventually developing an antidote against it.

Chiyo was responsible for sealing the One-Tailed Shukaku inside of Gaara under the orders of the Fourth Kazekage,[8] noting that of the Kazekage's three children, Gaara was the only compatible one.[9] Some time after this, Chiyo and her brother removed themselves from the affairs of Sunagakure and spent their time fishing together, where Chiyo would play jokes on her brother by pretending she had died just to scare him.

Chiyo also expressed a desire to kill Sakumo Hatake to avenge the killing of her son and daughter-in-law, which left her grandson Sasoriorphaned.[11] After that Chiyo tried to help Sasori ease the pain by caring for him and teaching him the Puppet Technique. Chiyo would later watch Sasori create his first puppets that would resemble his own parents. This was meant to fill the void of his parents dying. In the anime, while still a child, Sasori became very instrumental in the development of puppets and poisons for the village, regularly filling orders from Chiyo herself. As Chiyo watched Sasori continue to immerse himself in puppets, Chiyo became increasingly concerned for her grandson. However, she instead chose to remain indifferent, focusing most of her attention on helping the village. One day, Komushi, a young shinobi and one of Sasori's only friends, was badly injured during a mission, costing him his right arm. Demonstrating a new style of puppet ninjutsu, Sasori replaced Komushi's arm with a fully movable puppet arm, coated with Sasori's newest poison. Later, Komushi died from accidentally ingesting the very poison. As Chiyo's concerns continued to grow, she began noticing a pattern with Sasori and decided to investigate. To her horror, she discovered that Sasori has taken Komushi's corpse and turned it into a human puppet.[12]

Later, to Chiyo's dismay, Sasori left Sunagakure and abandoned his parent puppets, showing that he gave up on them.

After Gaara is kidnapped and Kankurō is poisoned by Sasori, Bakirequests that Chiyo help in curing the poison. Chiyo initially refuses, no longer concerned with the fate of the village, but Sasori's involvement persuades her into helping. In spite of this, Sasori's poison is beyond her expertise to cure. Much to her own dismay, she admits that Tsunade would be the only one capable of healing him. Even with such an admission, she is not willing to contact Tsunade, believing firmly that asking other villages for help makes their own look weaker.

When Team 7 arrives after learning of Gaara's kidnapping, Chiyo instantly attacks Kakashi Hatake under the mistaken impression that he is his father: Konoha's White Fang, who had killed Sasori's parents. Naruto blocks the attack and Ebizō clears up the confusion, after which Chiyo plays the attack off as senility. With that over, Sakura is able to heal Kankurō, much to Chiyo's surprise. Once Kankurō is healed, Team 7 prepares to go after the Akatsuki to rescue Gaara, and Chiyo joins them as an adviser from Sunagakure. She explained to Naruto what a tailed beast was, and confessed to sealing the One-Tail into Gaara. When Team 7 encountered Itachi Uchiha, she remained in the rear in order to cancel any genjutsu that was cast on her comrades.

After reaching the Akatsuki hideout, Team 7 splits up to pursue the only two members present; Kakashi and Naruto go after Deidara, leaving Chiyo and Sakura to fight against Sasori. The battle goes in their favour at first, with Chiyo controlling Sakura to help her avoid Sasori's attacks and smash his "puppet armour", Hiruko. The destruction of his puppet forces Sasori to reveal himself, which also reveals the fact that he hasn't aged a day since departing the village twenty years earlier. Now unmasked, Sasori brings out the first of his human puppets: the Third Kazekage. This puppet is decidedly more powerful than Hiruko, and Chiyo is forced to summon Sasori's mother and father puppets just to fend off its powerful attacks. Even with the two puppets, Chiyo is overwhelmed by the Third's Iron Sand techniques, which prove to be the puppet's biggest weakness, leaving Sakura to be the one to destroy the Kazekage puppet.

Down another puppet, Sasori reveals the secret of his youth: he has converted himself into a puppet. The only living part of him remaining is his heart, making him difficult to kill. Since neither she nor Sakura can destroy his puppet body, Chiyo summons the Chikamatsu Collection. To mock the summoning, Sasori summons one hundred of his puppets, a feat only possible thanks to his unique body. In the ensuing battle, Chiyo destroys many of Sasori's puppets and vice versa. Both collections seem to be about equal in power because, despite the fact that Sasori's overwhelm Chiyo's in numbers, the quality and teamwork of her puppets far surpass his. She is wounded and poisoned by one of Sasori's puppets that slashes her right shoulder, but the puppet was quickly disposed of by Chiyo's puppet and she continued to fight while enduring the pain.

Using a special chakra-sealing orb given to her by Chiyo, Sakura tries to seal Sasori's Chakra Pathway System, only to catch his empty puppet body. Sasori, having ditched it mere moments before, simply goes to a spare body and tries to stab Chiyo with a poisoned sword. Sakura takes the blow in her place, giving Chiyo a chance to stab Sasori through the heart with his parents' puppets in the form of a hug. Before Sasori dies, he insists that at least Sakura cannot be saved. Chiyo disagrees, and uses a special life force-transferring technique to heal her. While this would normally be fatal for the average shinobi, Sakura was not quite dead, thus Chiyo does not die in the process. After Sasori dies, Chiyo speculates that he had actually taken the attack willingly, since he simply wanted his parents to hug him.

After reuniting with Kakashi and Naruto, who have succeeded in retrieving Gaara, Sakura pronounces Gaara dead, causing Naruto to break down in tears. Although Chiyo tries to calm him down, Naruto lashes out and blames her for his death, saying that if she had not sealed Shukaku within Gaara he would not have died. In an attempt to apologise for what she had done, Chiyo tries to revive Gaara. Although she initially has too little chakra left to do so, Naruto donates some of his own to help finish the resurrection. With Gaara's revival, Chiyo realises that the future of Konoha and the Sand will be much better than things were back in her day, and then dies peacefully, with her view of the world changed thanks to Naruto.

In preparation for the Fourth Shinobi World War, Chiyo is reincarnated by Kabuto Yakushi to fight against the Allied Shinobi Forces. In the anime, it was revealed that Kabuto intended on obtaining Sasori's DNA to reincarnate him, but mistakenly reincarnated Chiyo instead, though still recognised her as a famous and useful reincarnation.[17] After being mobilised, she becomes part of the group that Chūkichi requests assistance from, alongside Kimimaro and Hanzō. With this, Chiyo notes that the technique had been improved since Tobirama Senju's time and that the one who reincarnated them must be something else, to bind so many souls at once.

Encountering the remnants of the Surprise Attack Division, where Deidara was imprisoned, Chiyo compliments Kankurō on defeating Sasori. When the opposition begins their retreat with her group in pursuit, she swears to take revenge against whoever reincarnated her, while concerned about being embarrassed if they forced her to play dead. This results in an argument with Hanzō, who calls her a "puppet hag", to which she retorts that he was a "big snorkel geezer".

After Hanzō summons his salamander and recognising the poisonous gasit exhaled, Chiyo informs Kankurō that the creature requires five minutes to generate and use the toxin, but that she knew the antidote, having fought with Hanzō before. Engaging the reinforcements from the Fifth Division with Kimimaro the following day, Chiyo takes control of asamurai to use as a puppet. In the anime, Kankurō intervened and freed the samurai from her control. By that time, learning that Kankurō has the Mother and Father puppets alongside the Scorpion puppet, Chiyo's guilt for her inability to save Sasori is brought into light. But finding good memories of her grandson along with the bad, Chiyo admits that the puppets are in good hands yet continues investing over him. Later observing the arrival of one of Naruto's shadow clones, remarking that the youth has changed in ways besides his height, Chiyo is then seemingly struck by Naruto's Wind Release: Rasenshuriken, but in the anime along with Kimimaro managed to dodge it before being struck.

When the Impure World Reincarnation was released, Chiyo — who had still been battling the Alliance's members — was enveloped in a light of sorts before beginning to deconstruct. As her spirit ascended, she asserted that she could finally die once again as her soul returned to the afterlife. In the anime, Kankurō arrives in time to see the process. While he is sad to see the elderly puppet master leave once again, Chiyo acknowledges the younger Suna-nin's skill in the same art, proudly intrusting Kankurō to carry on puppetry ninjutsu. 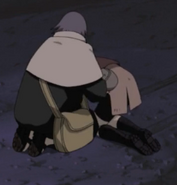 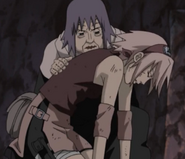