Skull and Bones
Christopher Cross "Chris" Griffin is the middle child of the Griffin family . He is 13 in the first three seasons, and declared 14 in "Trading Places". He appears to have only aged a year in the course of the show in spite of Meg aging three.

In The Real Live Griffins, he is replaced by Philip Seymour Hoffmanin "Fifteen Minutes of Shame".

Chris is voiced by Seth Green. However, he had not been hired until after the original Pilot Pitch. For that, series creator Seth MacFarlane provided Chris's voice, giving his voice a deeper tone as compared to how Green does it.

Chris' character resembles Milt, the son of the main character Larry Cummings in The Life of Larry, one of the animated short films created by Seth MacFarlane at the Rhode Island School of Design in 1995 that led to the development of Family Guy.[citation needed]Chris was originally given a "punk" image, according to creator Seth MacFarlane's DVD commentary tracks. He wore earrings during the first three seasons, and his painful awkwardness was not as emphasized as it is later in the series.[citation needed]

Chris' voice was based on Ted Levine's performance as Jame "Buffalo Bill" Gumb in The Silence of the Lambs. Green admittedly did an impression of the character during his audition for the role of Chris.[2] His main inspiration for Chris' voice came from envisioning how "Buffalo Bill" would sound if he were speaking through a PA system at a McDonalds.[3] In the episode "Stew-Roids", Chris re-enacts a scene from the movie where Buffalo Bill dances nude in front of a mirror, albeit after tucking his penis in between his legs.

Though Chris is not the brightest one in the family, he is particularly coherent and makes a good point when talking about movies with Carl. Chris deals with the problems that most pubescent boys face: acne, girls, and school. Chris has been known to feel self-conscious about himself, especially his weight. In fact, on the Volume 1 DVD Boxset, it stated that Chris "wouldn't hurt a fly, unless it landed on his hot dog". He was referred to as an "Elephant Child" when he was born. Chris is also willing to do something as drastic as to convert to Judaism order to do better in school, specifically math. He once believed his low grades in mathematics were caused by himself when he tickled his brain by sticking an army man's rifle into his nose and accidentally puncturing a lobe. Chris both enjoys and excels at drawing and once almost managed to become a famous artist in New York, but failed when he refused to estrange his family.

Chris, like his father, is obese, has a low IQ, and little to no common sense; however in "Fast Times at Buddy Cianci Jr. High" Brian refers to Chris's class as intelligent before going to teach remedial English. Also, various story lines give him autistic savant talents, such as artistic ability, and detailed knowledge of film and TV actors. Both he and Peter have also demonstrated proficiency in the use of American Sign Language. Occasionally he exhibits unexpected, uncharacteristic insights, such as when he gives Peter and Lois a detailed and articulate lecture on the effects and disadvantages of marijuana. He has also demonstrated an ability to quickly adapt to new cultural surroundings. For example, when the family moved to London, England in "Patriot Games", Chris was the only member of the family who was able to quickly learn and speak cockney English.

Chris is usually depicted as naive to the point of blamelessness. However, when Peter and Lois were having a fist fight in "Lethal Weapons", Chris cheered for Peter, telling him to "kick her ass!" Also, in Stewie Griffin: The Untold Story, when Lois and Peter are trying to make out, the children mistake it for a fight and Chris says "I don't know what they're fighting about, but I think Dad's winning. Go Dad!"

In a running gag, Chris is regularly tormented by an evil monkey who lives in his closet but they cleared there differences shortly before the monkey moved to Jake Tucker's closet in "Hannah Banana".

In "Emission Impossible", it is revealed that Chris was born as an accident, due to a broken condom. As a result, Peter and Lois filed a lawsuit against the company and bought the house they currently live in. In "Peter's Daughter", Lois revealed that she smoked and drank a lot when she was pregnant with Chris to try and incite a miscarriage, but chickened out halfway through the pregnancy. This may be the explanation for Chris' stupidity and other anomalies. Also, it is known in "And the Wiener is..." that Chris possesses an abnormally large penis.

While Chris is better treated than Meg, he is usually more subjected to Peter's thoughtlessness, since Peter frequently neglects Chris in favor of other children or himself, and often accuses Chris of being "needy." Unlike Peter, Chris also doesn't seem to dislike Meg as much, merely having a rather extreme sibling-rivalry relationship and at times, treats her very well .

Chris is generally mild-mannered and friendly, but is often rude to others when angered, such as in "Long John Peter", when he both insulted Joe Swanson for his handicapped status, and hit Brian with a chair just to go back to the vet and see a girl who broke up with him. Another example was in "Movin' Out (Brian's Song)", when Brian just came back after being dumped by Jillian, Chris said, "Welcome home, asshole!"

In "When You Wish Upon a Weinstein", Chris almost converted to Judaism after Peter told him that Jews are smarter and more successful. Lois came to Chris's bar mitzvah to end the conversion, and a crowd of angry Jews chased after them. However, in "Family Goy", he would find out that he was already Jewish. 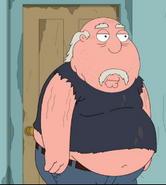