Cindi is the loud mouth blonde head cheerleader for Buddy Cianci Junior High School. In "Peter Griffin: Husband, Father...Brother?", Peter Griffin fantasizes about her while imagining that she opens her shirt to reveal chicken. As he eats, it's turns out he is actually biting Lois's hair. She was last seen tied up in the boys bathroom. She was imitated by Stewie so he could try to hypnotize the audience at a basketball game, and was tied up and gagged in the bathroom. During the basketball game, she is found by Quagmire, who exclaims "Jackpot!" and implied to rape her in the bathroom stall.

She is voiced by Tara Strong. 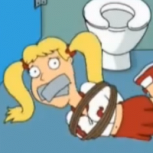 Add a photo to this gallery
Retrieved from "https://xianb.fandom.com/wiki/Cindi?oldid=213131"
Community content is available under CC-BY-SA unless otherwise noted.