Little is known about Cindy's life and past before the events of Jimmy Neutron: Boy Genius, except that she has a mom and a dad.

It is known that she moved to Retroville and initially found herself the most respected and most intelligent person in her class at school, a position that she used to have. She also began a friendship with peers, such as Libby.

Jimmy took her "smartest person in Retroville" title when he moved into the house across the street from her whereupon Cindy, now second runner up, began a rivalry with him. She used to begin frequently attacks his intelligence by criticizing his every mistake, even though most likely, she only does this to mask her love for Jimmy. She's frequently helped by Libby. Her home life is rarely shown, and her parents are only minor characters in the show. But some of the statements she makes during "Stranded" seems to suggest that she's not very happy at home.

Cindy is a member of the group of five, along with Libby, Carl, Sheen, and Jimmy, who usually go on his adventures with him. She began developing a deep friendship with these five, despite being the most aggressive and critical person in the group 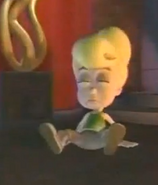 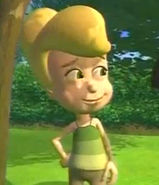