Clair first appeared in five episodes of the fifth season of the original series anime.

As Ash and his friends were near Blackthorn City, they discovered a Dratini and a Gyarados in a river. They discovered that both Pokémon belong to Clair, who was following the Dratini down the river as it prepared to shed its skin. Team Rocket snatched the Dratini, however, and Clair gave chase, demonstrating her highly acrobatic abilities. Dratini escaped, and Ash fought to protect it. During the ensuing battle, however, an electric shock was headed straight for Dratini, but Clair jumped in front of it to absorb the shock. Dratini witnessed its Trainer's devotion, and evolved into a Dragonair in order to put a stop to Team Rocket. Later, Clair was finally able to perform an important ritual to purify the legendary Dragon Fang. Clair then went on to accept Ash's challenge for a Rising Badge.

During the battle, Ash had the first strike, but the battle was cut short when Team Rocket stole the Dragon Fang. Ash,his friends Clair and Team Rocket all ended up in the Dragon Holy Land, where Team Rocket tricked a Dragonite into helping them. Luckily, Liza and Ash's Charizard arrived to help save the day. Ash's Charizard then helped him earn him his final Johto League Badge by defeating Clair's Dragonair.

Clair reappeared in A Pokémon of a Different Color! when she came to Cave Island in the Decolore Islands to hunt for a Shiny Druddigon. While there, she bumped into Ash and met Iris, Cilan, and Alexa. She revealed that she caught the Dragonite from the Dragon Holy Land, which had a fight with Iris's Dragonite after the latter crushed a flower. The Druddigon she was searching for went on a rampage on the island, which she was able to calm down, before it joined her team.

She reappeared in SS028, where Iris met her during her travels in Johto. Clair invited Iris to visit the Blackthorn Gym, where the two had a battle, which eventually ended in Clair's victory.

Although Clair did mention Lance in the anime, he is not her cousin like in the games; instead, she recalled having trained him, or rather him training her at the Blackthorn Gym before joining the Elite Four. 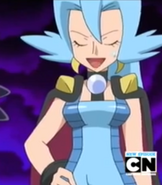 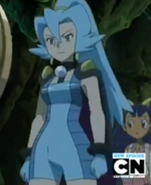