Clover is a main character in the "Totally Spies!" universe, along with her best friends and fellow spies Samantha and Alexandra. She is voiced by Andrea Baker in the English version and Fily Keitain the original French version.

She is Mandy's rival. Clover's counterpart is Pam, from the previousWOOHP spy team. On her WOOHP missions she wears a redCatsuit.

Clover attended Beverly Hills High School in Beverly Hills, California, along with Sam and Alex. Unlike Sam, Clover's academic performance was generally not stellar. In the episode "Queen for a Day", Alex mentioned that Clover got a D in her astronomy class. Clover also revealed in the episode "Alex Gets Schooled" that her grades were "mostly A's and B's", along with a C in metal shop, suggesting that her academic performance seemed to improve. In the episode "Mime Your Own Business", Clover once downloaded one of her English essays off the internet.

In the episode "Spy Soccer", Clover mentioned that she is a part of the Fashion Victims Club, an organization that "provides charitable donations in the form of trendy clothes to the stylistically challenged".

In the episode "Evil Bouquets Are Sooo Passe", Clover got extremely jealous when Sam dated her ex-boyfriendFernando, despite the fact they broke up two years ago. Hinting he may of been her first love or first serious boyfriend as they only separated due to him moving away. This episode showed Clover's trait of jealousy, despite this she shows great gratitude when Sam dumped Fernando to avoid hurting her feelings; revealing she was genuinely heart broken and not just being bitter, although it can be admitted she was at the start of the episode.

In the episode "Halloween", Clover was shown to be the second most mature after Samantha. As Alex was whining to go trick or treating, edging Chucky on to misbehave, although Alex seems better with children than Samantha or Clover. So it could be assumed their maturity is in age older, Clover being in the middle.

At Malibu University it is speculated that Clover is doing well or at least passing because she has completed one semester of school. At one point, she tells her friends, "You're looking at the master of the last-minute study sesh!", meaning that like a lot of college students, she tends to cram.

Of the 3, Clover's the one who acts like the most typical teenage girl—obsessed with fashion, boys and her appearance. Ironically, when it comes to bad guys, she's usually the one who's transformed in some way, be it becoming a bodybuilder, a sumo, or even a human catgirl. She was even dressed in a royal dress by a villain who wanted a consort to rule the world alongside him. Even though Clover tends to be more focused on materialistic and superficial substances than on her missions, she does understand the importance of friendship and teamwork. She will rise to the occasion.

Clover is the most flirtatious of the main group. She is known to have had an abundance of boyfriends and will do anything to get a guy. In almost all the episodes, while she is on a mission, she is always talking about a guy she wants to date or talking about an outfit she's going to wear on a date. This is strange, because during elementary school, she was always bullied by her classmates and mainly by one boy, because they regarded her as being particularly easy to trick, as we are told in the episode "Spies vs. Spies". The initial B-story of part 3 of the episode "Evil Promotion Much?" had her struggling to find a date for her debutante party, as she had dated every single boy in the city. Her love of boys can almost (if not entirely) be matched by her love of fashion and beauty.

Clover is the most intimately knowledgeable of her friends about pop culture topics, especially topics having to do with attractive male celebrities (for reasons stated above). She has been known to use questionable methods to obtain such information, but nothing truly illegal. She is also rather determined in this regard, as this is what attracts her to an unnamed dark knight who chose her as his queen, but she ultimately turned him down when she discovered that he was a male chauvinist.

Being a stereotypical "American teenage girl", as well as being a native of Los Angeles, California (as revealed in "Evil Promotion Much?"), Clover speaks with a strong valley girl accent by saying things like "so totally", and adding the word "much?". Some episode names are a play on her accent.

Clover is a tall, athletic, slender, beautiful girl with white skin, blonde hair, bright blue eyes, and a trendy fashion style. Her hairstyle is a fluffy, personalized bob cut that she calls a coif bob in "Totally Switched Again", which has the rear and sides are flared out while the front bangs, called a mop, come out over the left side of her face and flips when her shakes horizontally. Clover's style in the Season 1-2 was mostly capris and pants. Later in Seasons 3-5, she wore more skirts and dresses and incorporated more high heels. Most of her bathing suits are bikinis, with the exception of "The Getaway" where she wore a white one-piece bathing suit with a red towel. She wears an orange bikini in "Eraser".

In "Stuck in the Middle Ages with You" The color of her primary outfit from her button shirt and pants was pink and green with a belt as her addition. In "Zooney World", she retains this outfit as her pants changed to blue. In "Malled" the color is now replacing cyan and orange as the pants she wears has a blue flowery design and her shoes changed to a brown heeled shoes.

In "Another Evil Boyfriend" Clover wears a light pink sleeveless top with number 1 on the center of her top which is dark pink, pink denim skirt and white warrior flats. In "Evil Sorority and "Totally Mystery Much?" The outfit she wears previously is been slight altered and change color from pink to a different shades of purple, her skirt is replaced with a shorts with black belt and her flats is replaced with a matching cowboy boots.

In Season 6 during the end of ”Clowning Around!” and the two part finale of “So Totally Versailles!“ Clover wears a dark pink short sleeved button dress with a light blue belt to her waist and a matching brown heeled sandals.

In Season 6's 2 part finale “So Totally Versailles!” Clover wears her disguised form is a different shades of hot pink and white long sleeved dress as her hair and face transformed into a classic styled look as her hair is extended in a classic bun with Victorian Era styled ringlets.

Alex is one of Clover's closest friends. She helps her out whenever she needs her.

Sam is one of Clover's closest friends. Sam does get annoyed with Clover, but they usually become friends again at the end of the episode.

Clover respects Jerry in a easy way, however she would do what he says. She doesn't think Jerry isn't fun enough but loves to help out on many missions.

Clover has take a liking to Britney, because a reason of being a cheerleader makes her happy of it. However, she became frustrated at Britney when Jerry assigned her to WOOHP Australia to Blaine much to Clover's envy and disdain.

Mandy is Clover's primary enemy. The two girls have apparently hated each other ever since they first met, according to a comment Sam made in "Attack of the 50 Foot Mandy". In "Totally Spies! The Movie" Mandy instantly went on the offensive and attacked Clover, Sam, and Alex. However, in the series Clover is the target of Mandy's worst actions. In "Malled", Mandy attempted to frame Clover for shoplifting even though Sam was the person who made the verbal counterattack.

Whenever she made an appearance in Season 5, she was always with Mandy, and she annoys the spies generally the same way her cousin does, as Mindy's essentially just a blonde clone of Mandy.

Clover seems to like a variety of different males - some with tanned or white skin, and others with blond, brown, or black hair. The only traits common to all of them include the following: the fact that they are usually taller than Clover, considered attractive, and have a certain "quirk" about them. However, the male villains that she encounters take love and attraction a step further, they want to make her their queen. She has thus been made queen by 3 villains so far.

While not really a romantic interest, the Black Knight selected her to be his queen in "Stuck in the Middle Ages with You", apparently liking her fiery personality. He even comments on how lovely she looks in her dress before acting condescending with her right afterwards. However, he would not have treated her like a queen (with love, kindness, consideration, and respect), and given her any power to rule with him, as he states that his ideal queen was "all about obedience". Unfortunately, she did not return any affection to him and she ended up arresting him.

Blaine was Clover's boyfriend from Season 5, though they later broke up before Season 6 and becomes her second ex-boyfriend after Fernando in post Season 6.  Prior to the break-up, he was sent to Australia and they agreed to keep seeing each other. In the episode where Britney was sent to Australia to be Blaine's partner, Clover was angered when Britney got a romantic crush on Blaine from seeing his picture. In the end of Baddies on a Blimp, Clover wants to date with him but he had enough dating girls in L.A. after previously dated Mandyas the last girl from L.A. making Clover had enough dating with her ex-boyfriends.

Dean is the only boy who can resist Clover's flirting. Like Alex and Sam, Clover still holds romantic interest in Dean even into season five.

Gelee is another example of someone who was attracted to Clover but not someone she herself was attracted to. In "The Iceman Cometh" Gelee stated that Clover would be the perfect "Ice Queen", based purely on her beauty. He even created a throne for her to sit on. He was obsessed with chess, and challenged Clover to many games with him. However, Clover was easily bored with the game and helped defeat him.

Clover fell for him in, "The Suavest Spy". Even sharing a dance with him at the ball. Kyle is also one of the few guys who are intellectual Clover has fallen for.

In "Evil Bouquets Are Sooo Passe", it was revealed he was Clover's ex boyfriend from two years ago. (During this episode.) They only split up due to him moving away and Clover quickly began crushing on him again, even being hurt when Sam started to date him. It is heavily hinted he was her first serious boyfriend.

Clover flirted with Tad in "Totally Spies! The Movie", suggesting how he was cool and attractive. Although Tad never said anything on the matter; he seemed pleased with Clover's interest in him. However after his betrayal, Clover quickly got over him and even stated how "lame" he was.

Just like with her experiences with the Black Knight and Gelee, Clover was selected to be the queen of a villain; this instance it was Salty Schooner, a archetypical pirate bent on taking the WOOHPtanic and using it to rule the seven seas. After seeing her in her pirate chic clothing, he falls in love with her and captures her. When she is taken aboard his vessel, he tries to woo her and later proposes marriage to her, planning on making her his wife and pirate queen, but she refuses and defeats him in single sword combat before WOOHP arrests him and his crew. 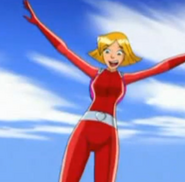 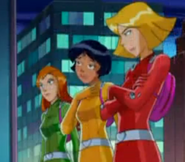 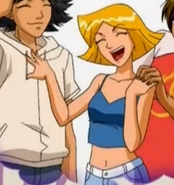