Connie D'Amico or Connie DiMico in some episodes, is the most popular girl and the head of the cheerleading squad at James Woods Regional High School where Meg and Chris also attend. Connie is mean and spoiled, and generally is seen bullying Meg. She is occasionally punished for her cruelty, and has been emotionally, physically and verbally attacked by each member of the Griffin clan, but this has not changed her attitude.

In "Let's Go to the Hop", Peter, while disguised as "Lando Griffin" was fooled into going to the Winter Snowball with Connie, however dumped her in front of everyone for Meg. She has done toad, but was impressed with Lando, who got her and other students to quit. In "And the Wiener is...", Connie publicly humiliated Meg at her birthday party, persuading Meg's mom Lois Griffin to send friend Glenn Quagmire over for his own fun.

In "Barely Legal", Brian gave Connie a taste of her own medicine after she embarrassed Meg at the dance. Briefly in "Peter's Daughter", Connie confronts Meg and makes a fat joke, this endues Peter to repeatedly and brutally smash her head into a fire extinguisher, severely bruising Connie, but Connie is fully healed and back to her pretty self in future episodes. In "McStroke", Stewie tricks Connie into dating him only for her to find out he's a baby. Stewie yells out to the school that Connie made out with a baby, leaving everyone to think she's a pedophile; she is last seen getting arrested for this. In "Stew-Roids" she dates Chris briefly. Originally this is a challenge she takes on to make him popular, but she soon develops an interest in him. Later, Chris dumped her, causing her to lose her popularity for a short time. It is possible that she still likes him, although this relationship has not been mentioned since.

She goes on Spring Break in "A Fish out of Water" and parties with Lois.

She has dated all three of the main male Griffins, Stewie in "McStroke", Peter in "Let's Go to the Hop", and Chris in "Stew-Roids". In "Let's Go to the Hop", it is shown that Peter has a strong attraction to Connie, and this is also shown in "Stew-Roids": when she gets knocked unconscious by Chris and two other girls, Peter lies on top of her after she got hurt, much to the disapproval of the party guests. In "Dial Meg for Murder", Meg finally gets revenge on Connie, along with her friends by whacking her and her friends with a sack of unopened soda cans. After that Meg French-kisses the unconscious Connie. It seems that she fails to realize that being a bitch towards others causes her terrible comeuppance at the hands of the Griffin family as she never learns from the last time. Later, in "Leggo My Meg-O", Connie is made captain of a dodgeball team and chooses "everybody but Meg" and ends up pelting Meg with dodgeballs with everybody else.

Connie's last name was changed in the early stages of Family Guy development from Connie Resedes because it was claimed in the DVD commentary for "Barely Legal" by Danny Smith that he thought Mila Kunishad trouble pronouncing the original name. 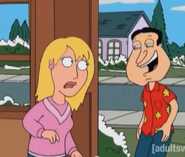