Cosmo Julius Cosma is one of the main characters on the show. He is one of Timmy Turner's fairy godparents alongside his wife, Wanda and his son, Poof. Cosmo is one of the dumbest characters on the show, rivaled only by Timmy's Dad, and his ideas are what often lead Timmy into trouble. He is at times a bit over-emotional. Cosmo is voiced by Daran Norris in the cartoon, who also voiced the CGI (3D) version of Cosmo in the live action "Fairly Odd Movie" and its sequels. A humanized version of Cosmo also appeared in the first live movie, played in live action by Jason Alexander. 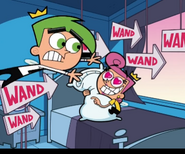 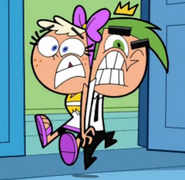