Courtney first appeared in The Vision. She was initially seen guarding the Submarine Explorer 1 at the Team Magma Hideout, and stayed behind as Maxie(Pokemon Generation) and Tabitha left for the Seafloor Cavern. While alone, she experienced a vision of Primal Groudon attacking Team Magma, but this didn't deter her for long. She was last seen sending out her Camerupt to battle Brendan's Sceptile when he arrived. 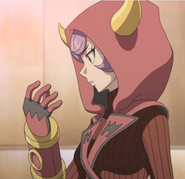 Add a photo to this gallery
Retrieved from "https://xianb.fandom.com/wiki/Courtney?oldid=344973"
Community content is available under CC-BY-SA unless otherwise noted.