Shaggy Jr. Rogers
Crystal is a government agent from another planet posing as a freelance nature photographer. Upon finding him, she becomes Shaggy Rogers's love interest, due to being disguised as a hippy from the late 1960's and using coollingo.

In her human guise, Crystal is beautiful, managing to capture Shaggy's heart at first sight. She has long black hair, brown eyes and appears to have a tan. Crystal is slender and tall, almost matching Shaggy's height. She's seen sporting an orange shirt with a brown studded belt and matching orange headband. Keeping in theme with the late 1960's fashion, Crystal wears light-blue bell bottom jeans, brown moccasins, a peace sign necklace that she uses to transform back and forth into her alien form, and a camera.

As an alien, Crystal towers over Shaggy in height, however still keeping a distinguishable feminine hourglass shape. Her head is large and bulbous, common to the stereotypical appeance of an alien, as well as large eyes. Her light blue body is translucent and is composed mostly of fluid, with several bubbles moving around beneath her skin. The strange blue coloring also gives the resmeblance of glass making her name literal in a sense. She also appears to have three fingers on each hand.

Crystal is kind and charasmatic. She understands Shaggy's sense of humor and even speaks similar to the way he does by starting sentences with the word "like" and using "groovy". Crystal is brave unlike Shaggy and Scooby shown when the imposter MP's forced them to leave the cave area where they saw the jakelope and ultimately: the aliens. After walking a distance away from the cave, she immediately wanted to go back. Being a government agent from another planet, she wanted to keep her true identity a secret from Shaggy. Crystal admits her flaws of deciet to him, showing she did care and valued his friendship to be as honest as she could about her occupation and actual alien form when they were in danger. Crystal ultimately did have feelings for Shaggy but seemed to try and keep anything romantic from happening knowing in the end "long distance relationships never work out."

Crystal and Amber both had the ability to change their appearances using what looked like a peace sign pendent, but was actually an image-changing device. They both also had super-human strength when fighting back against the SALF station crew and imposter MP's.

Crystal and her golden retriever, Amber, found Shaggy Rogers and Scooby-Doo unconscious in the middle of the desert. Upon their awakening, she gave Shaggy some water and offered to give him and Scooby a ride back into town. Unbeknownst to both Crystal and Amber, the boys had fallen head over heels in love with them. After dropping them off, Shaggy and Scooby met up with the rest of the gang, along with Lester, shocking them with being too smitten to eat. During this ordeal, Shaggy daydreamed how his life would be like with Crystal in a song, "How Groovy".

Crystal unfortunately did not fulfill Shaggy's dream of being his when she later revealed herself to be a government agent from another planet. Crystal did end up having feelings for Shaggy, but did not pursue them knowing she could never be with him. After the SALF employees were captured, Crystal and Amber's ship came to retrieve them from their mission. In a heartfelt goodbye, she kissed Shaggy on the lips hoping he would always remember her as a dear friend, leaving him heartbroken and devastated along with Scooby Doo. 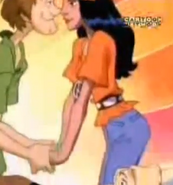 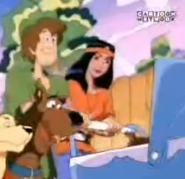