I know why everything's different. We destroyed the Entity and by destroying it, it was as if it never existed. So everything is touched: all the evil, all of the curse, all of the losers in rubber mask and dumb monster abstractions, none of it ever happened. By destroying the Evil Entity, we've created a totally different timeline. 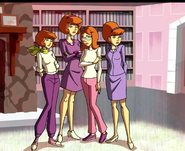 Add a photo to this gallery
Retrieved from "https://xianb.fandom.com/wiki/Crystal_Cove_The_Sunniest_Place_on_Earth_Timeline?oldid=254765"
Community content is available under CC-BY-SA unless otherwise noted.