Daisy (Japanese: サクラ Sakura) is the oldest of Misty's sisters, and the one who gets along the best with Misty out of the three.

When Misty left to become a Water Pokémon Master, Daisy and her other two sisters were put in charge of the Gym. However, after Gary and the other two Trainers from Pallet Town defeated them consecutively, they decided to stop accepting battles and to instead perform water ballet shows for the residents of Cerulean City. They were continuing this and neglecting the Gym when Misty stopped by to drop off her Starmie and her Horsea to play at the Gym. It is unknown for how long afterwards the sisters continued to do this.

In Gotta Catch Ya Later!, the sisters called Misty to tell her that they had won a trip around the world because Daisy was third place in a pageant. They made Misty return to Cerulean City so she could take over the role of Gym Leader for them.

They returned to the Gym two weeks before A Date with Delcatty. However, Misty is still the official Gym Leader, with Daisy and the other sisters filling in when Misty is away. However, they still don't like battling, and in A Real Cleffa-Hanger, Daisy asked Misty if they could just give Badges to the Trainers instead of battling them.

Cheerful and somewhat absent-minded, Daisy spends more time at the Cerulean Gym than Violet or Lily, though she is still not very responsible as a Gym Leader; she will give Gym Badges out for free, even when Misty is the official Leader. 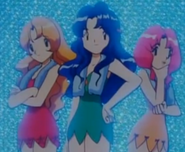 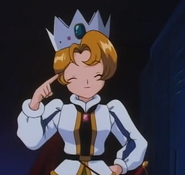 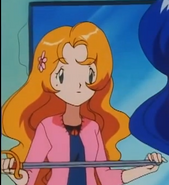 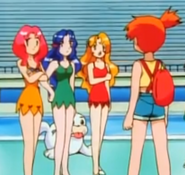 Add a photo to this gallery
Retrieved from "https://xianb.fandom.com/wiki/Daisy?oldid=260932"
Community content is available under CC-BY-SA unless otherwise noted.