The Lover of Lady Tsunade.

After the death of his younger sister, he began advocating for a medical ninja to be assigned to every ninja squad. Tsunade shared a similar belief, and the two soon began dating because of it. During their time together Dan shared with Tsunade his dream of becoming Hokage wanting the title so that he could better protect the villagers of Konoha. Tsunade gave Dan her grandfather's necklaces good luck and encouragement to follow that dream. Soon after that, however, Dan was fatally wounded during the Second Shinobi World War, and, despite Tsunade's attempts to save him, succumbed to his injuries. Tsunade would later take on Dan's niece, Shizune, as an apprentice and sometime later, leave the village.

In preparation for the Fourth Shinobi World War. Dan is reincarnated by Kabuto Yakushi to fight against the Allied Shinobi Forces, before being mobilized alongside Asuma Sarutobi and Hizashi Hyuga, where he informed them of the details regarding the forbidden technique used to reincarnate them. Relocating to the Land of Lightning's coast, Dan emerged from the sea amongst the White Zetsu Army with the others, before engaging the opposing First Division. Confronted by Chōza Akimichi, Dan remarked that he had grown since their last encounter.

As the conflict continued, Dan, in explaining his abilities, tells them that he must be captured before he can activate his Spirit Transformation Technique. After a prolonged battle, Dan congratulated the shinobi on their efforts, while trapped inside the barrier. However, in the wake of the Demonic Statue of the Outer Path's devastating attack, the barrier surrounding him was destroyed, freeing Dan but injuring him in the process.

Resealed within the barrier by the following day, Dan observed the arrival of Naruto Uzumaki's shadow clone to the battlefield, initially mistaking him for Nawaki due to their resemblance to one another. Shocked at hearing that Tsunade had placed her trust in Naruto and his promise to not die until he became Hokage, Dan asked just who Naruto was, to which Shikamaru Nara replied that he was the Nine-Tailed Demon Fox's jinchūriki and had always dreamt of becoming Hokage. Dan smiled as he realized that both his and Nawaki's dream had lived on through Naruto.

Continuing to converse with Chōza as he guarded the barrier, Dan was greatly shocked to hear of Madara Uchiha's reincarnation. Furthermore so by Tsunade becoming Hokage and as such, her entering the fray alongside the other Kage. Despite Chōza's confidence, Dan was adamant that Madara shouldn't be underestimated, believing that the only person who could possibly defeat him was already dead. He then implored Chōza to instead seek out and stop the person who reincarnated Madara, judging this to be the only method to beat him, before silently pleading for Tsunade to survive.

With the Impure World Reincarnation released, Dan is enveloped in a light of sorts and, as he began to deconstruct, commended whoever had stopped the technique. Now ungoverned, Dan requested that Chōza have them dispel the barrier which sealed him before using his Spirit Transformation Technique to take control of his ascending spirit. Thanking Chōza for understanding his intent, Dan left and reached Tsunade in time to take over her body and save her from one of Madara's attacks. Conversing in her subconscious, he thanked her for accomplishing what he didn't in life and apologized for causing her only hardship. He then told Tsunade that he would wait for her in the afterlife, but that she wasn't to follow him yet as she was his dream itself. Kissing her forehead before he disappeared, Dan expressed gratitude that he was reincarnated\because it allowed him to finally protect her. As his final act, he seemingly imparted the remainder of his chakra to Tsunade, restoring her Strength of a Hundred Seal, and then his soul returned to the afterlife.

Not much is known of Dan's abilities, but by all indications, he was a very capable and efficient ninja that served his village well. This is proven further when Kabuto Yakushi reincarnated him thinking that he'd be a valuable asset on the battlefield. Kakuzu referred to Dan and Asuma as gold and silver generals a reference to shōgi pieces, again indicating that Dan was a powerful shinobi. In the anime, Dan demonstrated high-level taijutsu prowess along with great speed and evasive skills, being able to single-handedly disarm and defeat several enemies.

Dan possessed a unique technique called the Spirit Transformation Technique. This ability allowed him to become a living spirit to attack his opponents. He can also use it to take control of a target's body. Dan also noted that this technique took many lives during his lifetime, and implored his opponents to trap him in a barrier before he could activate the technique. In response to this, however, Chōza remarked it wasn't easy to trap someone like him.

Dan also displayed high levels of chakra control as he could transfer it at will, to which he showed very high reserves as he restored Tsunade's own reserves along with her Strength of a Hundred Seal before departing to the afterlife.

In terms of nature transformation, Dan was proficient in Wind, Fire, Earth, Yin and Yang Release. 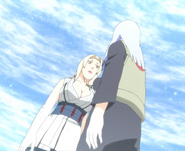 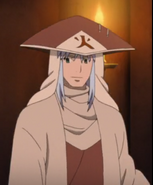