Daniel "Danny" Fenton AKA Danny Phantom, is the half-human/half-ghost, and the main protagonist of the television show series, Danny Phantom. Known as 'Danny Fenton' when a human and 'Danny Phantom' when a ghost, his primary motive is to protect the citizenry of Amity Park from the dangerous ghosts coming through the Fenton Portal.

Danny possesses various superhuman attributes as a result of his unique physiology. He can freely use a variety of ghostly powers. He possesses some of his ghost powers in his human forms such as invisibility, intangibility, ghost ray, ghost sense, healing factor as well a low degree of enhanced strength and reflexes.

Going Ghost: Danny is able to transform from human to ghost and vice versa at will. His transformation into ghost form will often be accompanied by his signature phrase, "I'm going ghost!" or "Going ghost!". Once transformed he can use all of his ghost powers. 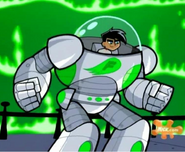 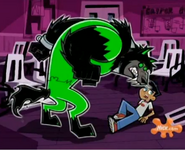