Daphne Blake (The 13 Ghosts of Scooby-Doo)

A member of the Mystery Inc. Gang.

While not as smart as Velma Dinkley, Daphne would always solve her problems in a different way. She later became more confident and started playing a more active role as time went on,[Note 1], having learnt self defense.[3][4]

In junior high, Daphne was more vain and fashion sensitive, likely to stop in the middle of investigating due to a dirt patch on her clothes, than being afraid of ghosts (which she had a strong disbelief in). She would commonly call upon her butler, Jenkins, to do various tasks, such as ridding her of people, beating a monster up, etc.

There have been several instances where Daphne has noticed and gained the attention of the opposite sex, which seems to be on a frequent basis these days. 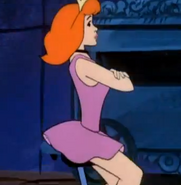 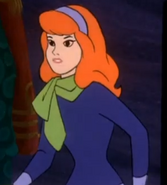 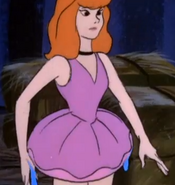 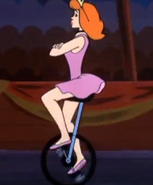 Add a photo to this gallery
Retrieved from "https://xianb.fandom.com/wiki/Daphne_Blake?oldid=219617"
Community content is available under CC-BY-SA unless otherwise noted.